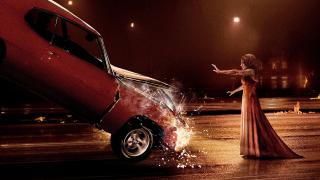 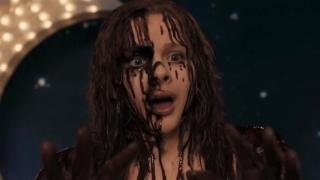 Viral videos are always fun. Here's one to promote this weekend's "Carrie" release where a girl in a coffee shop makes a bunch of crap move and freaks out everyone in the store. It's funny because people who go to coffee shops are obnoxious usually and it's fun when bad things happen to them. Except if someone pulled this crap in my Starbucks when I'm there. Joey needs his big boy coffee to make the grumpies go away.

Do people watch horror movies on New Year's Eve? I mean I guess some people have to right? You get all your friends together and talk about how lame Dick Clark is and then you watch some god awful horror movie you all make fun of. You think you're so cool don't you! I ask because After Dark's "Ritual" has just been slapped with a December 31st release date on VOD and I'm wondering if anyone will watch the film, which follows a former couple as they try to escape a satanic cult. How do you hate Dick Clark? He's a god damn American treasure. And he's dead. You're a real sicko jag off you know that?

Much like "Breaking Bad" and anything Joss Whedon has created for TV I refuse to watch "Dr. Who" because I find it annoying how much people talk about it. But I'm sure all the boys and girls are going to go ape doodie over the fact that the show's star, or former star I guess, Matt Smith will be playing the role of Patrick Bateman in the upcoming "American Psycho" musical that's coming to London this December. No word on if or when the show will find its way to the US but you have to figure it will and you have to figure it will be better. Because America is awesome and drinking tea is stupid.

Just because you can shoot a movie on your iPhone doesn't mean you should. Just like because you can travel to Barcelona doesn't mean you should either. But here's the trailer for "Hooked Up", the first horror film shot entirely on the iPhone. It's about two guys who head to Barcelona looking to find fun and some easy ladies but find themselves trapped in a house with all kinds of bad mojo going on. It looks like it was shot on an iPhone and I will not be able to get the image of 300 pricks standing around an Apple store not buying anything when I watch it.

Neve Campbell recently broke the silence around the possibility of a "Scream 5", and whoa daddy is it a big bomb that she dropped. Neve said, and you might want to sit down for this, that "I'm not sure they’re going to make it". I know right? Exciting. Wait there's more. She went on to say that if approached about the film she'd "have a chat with them about it". There you have it. The film might not happen, but if it does she might be interested in talking about it.

Big news about "The Host 2", the sequel to the much loved Korean monster flick, has dropped on the tubes and I'm going to throw up I'm so excited to tell you about it. Word has it that Park Myung-chun will make his directorial debut with the film that has been slapped with a summer 2014 release date. If you hate subtitles, you now have about a year and a half to learn Korean.

Go punch someone in the face, kids, because the second half of season 3 of "The Walking Dead" hits the boob tube next month and a brand spankin new trailer has hit the interwebs. I don't think it really shows much, but if we're being honest I watched it with the sound muted because the wife and I are pretty hooked on "Friday Night Lights". Yeah it went off the air a few years back, but we're finally watching it on Netflix. It's really good. You should check it out.

I don't really know what this means because the trailer actually looked kind of good, but the "Carrie" remake has apparently been pushed from a March release date all the way to October 18th of this year. I like to think that the filmmakers are just trying to be nice because they know it's cold as crap in March and they'd rather I not have to leave the house. So, thanks guys.

I had completely forgotten that there is a "Poltergeist" remake in the works but there is and Sam Raimi is producing the crap out of it with his Ghost House company. But who will direct!? Well according to the film's writer, David Lindsay-Abaire, Raimi will take on that role also and I for one believe him. He's got a freakin Pulitzer for F sake. Yuu going to call him a liar?

Want to see Wes Craven's "Scream" on the big screen this Halloween season? Me either but that jackass sitting across from you on the bus probably wants to so it's going to be there starting next week in selected theaters across this great nation. Just look at that guy sitting there, eating those Triscuits. God I want to punch him in the face.

I've never read a Dean Koontz book but his last name always makes me giggle like a school girl. And now I have absolutely no reason to read his book "Frankenstein Will Not Die" because the folks over at TNT are looking to turn it into a TV show. The show will be set in New Orleans and follow the famous doctor and his monster 200 years after it was created. See, if you wait long enough all written words will be turned into moving pictures.

Good news, Brian De Palma has confirmed that he is ok with Kimberly Peirce and her remake of the classic film "Carrie". I had always assumed all these people making remakes went to the original writers, directors and actors to get their approval before they even got started. Who knew.

Just in case you don't have Netflix, a DVD player, a VHS player or the internet... FEARnet has decided to start showing "Tales From the Crypt" starting October 5th.

I had no idea that A&E was making a "Bates Motel" TV movie but I've been huffing a lot of paint lately so I've missed some things. But this is a thing and it's happening and I guess Freddie Highmore was always cast as Norman a while back so today I'm here to tell you that Olivia Cooke and Nicola Peltz have both joined the cast. I think I missed my fantasy football draft also. I hope no one picked up The Fridge yet.

Still holding out hope for a third installment in the "28 Days Later" saga titled "28 Months Later"? Well writer/producer Alex Garland says it isn't going to happen. So piss off.

If you want to get your beady little eyes on some clips from the "Evil Dead" and "Carrie" remakes then you're going to want to get your ass on a plane and come to NY Comic Con because both will premiere footage there on October 13th. I mean I guess if you live in Jersey you don't need to take a plane. That would be silly. Would you fly from Newark to JFK? I'm not even sure that's possible. Think for once in your life you freakin jackass.

There's a new trailer for the "Total Recall" remake out but that's not the big news here. The big news is that in the trailer we have 100% confirmation that there's a 3 boobied hooker. I know, I can barely type I'm so excited. This might be the greatest day in the history of the world.

There can only be one "Highlander"! Well actually there can be multiple. There was for sure a sequel and now there's a remake of the 1986 cult classic that I've never seen. But I might see the remake, because Ryan Reynolds has been confirmed to be taking the lead in the film. I'm not going to go into why I will see it now because of him. I don't have to explain myself to you.

Sing this with me. I... like... movies with Danny Trejo. Charlie Sheen playing the president. And.. AND... TWINS! Remember those commercials?! Well I do and I'm talking about Elise and Electra Avellan being added to the cast of "Machete Kills". For those of you who don't follow the work of Robert Rodriguez the Avellan twins were those two girls from "Planet Terror" and the original "Machete" flick. Your move, 3 boobied alien.