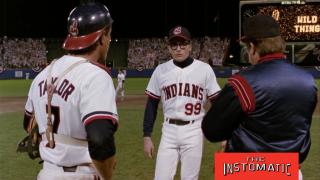 More Machete? Great. Less Jessica Alba? Not so sure...

Michael Kenneth Williams had what might be my favorite line ever in a TV show or movie on "Boardwalk Empire" but unfortunately I can only quote it in the shower, with music on and after a quick scan of my neighborhood to make sure no one is home. It's pretty bad. What I'm getting at here is Michael Kenneth Williams has been rumored to be joining the "Robocop" remake at Alex Murphy's partner and family friend. I mean partner in a police sort of way, not like life partner. Although they may have changed the story for the remake. I don't judge.

Blake Sheldon is apparently not the country singer. That guy has a T in his name or something. This Blake is an actor and he's been tapped to play not 1 but 2 roles in the upcoming season of "American Horror Story". Young Shel Shel (patent pending) will play the role of "Devon" and "Cooper" in the next chapter in the series. I have no idea who those characters are but they're powerful names so I have high hopes.

Do you like classic horror movies? Of course you do. Even if you don't you're too embarrassed to admit you don't like them. So most likely you and a group of friends will be too ashamed to call each other's bluffs about wanting to see "The Birds", "Frankenstein" and "Bride of Frankenstein" when they are restored and put into theaters this coming September and October. Make comments like "oh this is classic" and "did you know 'The Birds' is a reference to the threat of communism". You're going to look so cultured.

There's a new trailer for the "Total Recall" remake out but that's not the big news here. The big news is that in the trailer we have 100% confirmation that there's a 3 boobied hooker. I know, I can barely type I'm so excited. This might be the greatest day in the history of the world.

There can only be one "Highlander"! Well actually there can be multiple. There was for sure a sequel and now there's a remake of the 1986 cult classic that I've never seen. But I might see the remake, because Ryan Reynolds has been confirmed to be taking the lead in the film. I'm not going to go into why I will see it now because of him. I don't have to explain myself to you.

Sing this with me. I... like... movies with Danny Trejo. Charlie Sheen playing the president. And.. AND... TWINS! Remember those commercials?! Well I do and I'm talking about Elise and Electra Avellan being added to the cast of "Machete Kills". For those of you who don't follow the work of Robert Rodriguez the Avellan twins were those two girls from "Planet Terror" and the original "Machete" flick. Your move, 3 boobied alien.

I don't know why I didn't see this coming but Charlie Sheen has signed on to play the President in Robert Rodriguez's "Machete Kills". I assume Gary Busey will be joining the cast any day now. I'm fine with all this by the way.

Word around town is that Rick Jaffa and Amanda Silver have been picked up by the folks at Universal to bang out the script for "Jurassic Park 4". You might recognize those two names from their work on 2011's "Rise of the Planet of the Apes". Perhaps "bang out" isn't the right term I should be using. I don't know if they're banging or anything. They may be happily married and now their better halves are obviously reading this and throwing a fit. God I've ruined another marriage!

I had no idea I was so pissed that Darren Ward's "A Day of Violence" hadn't made its way to the States but the internet tells me I should be excited about it it hitting our shores on August 21st so god damn it if I'm not all a flutter. The film has been sitting around since 2007 follows a British gangster as he chops down his rivals who are after him for the money he stole. Seriously I have never heard of this thing. But don't let that take away from the hoopla that's about to drop... from my pants.

What's better than a Roger Corman flick where a bunch of girls run around having tickle fights? How about one of those woman being 50 foot tall and in 3D? I know, it seems so simple it could just work! Well word has come from the mountains that Corman is ready to unveil his masterpiece, titled "Attack of the 50ft Cheerleader", next month at Comic-Con after a panel discussion. Let the magic begin.

What could top last weeks new that Raj from "What's Happening" had joined the cast of Rob Zombie's "Lords of Salem"? How about Jeffrey Daniel Phillips joining the cast? Who's that you might ask? Why just one of the most famous cavemen in history. Ya know, minus the real cavemen. Let's call him the most famous insurance selling caveman of all time. Well next to the other two. There's three of them in those commercials isn't there? Let's just call him a guy. He's a nice guy. God I hate you.

Oh boy oh boy! More set pics from "The Dark Knight Rises" and this time we've got Anne Hathaway as Catwoman. Boy she looks comfortable in that suit. If people made a big deal over Michelle Pfeiffer doing flips in her Catwoman outfit back in 1992 I can't wait to see what sort of fuss they make about Hathaway stomping around the set like the Frankenstein monster recovering from hip surgery. Is it hot in here or is it just her?

I've seen a ton of movies that Michael Fassbender has been in but for the life of me I have no idea who the guy is. That aside though if I had one choice for who could play Alex Murphy in the upcoming "Robocop" remake he would be it. Don't ask me why he just would be. And the good news for me is that director Jose Padhilla wants him for the role too. Which I kind of think is weird since I don't know who he is. It's like if Rob Zombie wanted one of the Geico cavemen for one of his movie or something.

And last but not least Charlie Sheen has accepted a role in "Scary Movie 5". I don't know what else to say about that. I'm crying on the inside though.