Adi Shankar, who's produced films like "The Grey" and "Dredd 3D" apparently has plans for a new take on "The Expendables" using some of today's, or yesterday's, hottest action actresses. Dutch Southern has already been signed up to pen the script but no word yet on who would be in the film or when it would actually be happening. Two words. Kathleen Turner.

Ryan Lee, who you might remember from "Super 8", has been cast in the upcoming bully flick "White Rabbit". The film follows a young lad who starts to be haunted by a white rabbit, among other things, that he killed as a child. I had no idea you could bully animals. I thought they were just dumb beasts for our amusement and hunting pleasure. honestly I don't think a movie is going to change my mind on that now that I think about it.

No big surprise here but "Resident Evil: Retribution", the next chapter in the RE saga has been slapped with an R rating by the folks over at the MPAA. The big R has been handed down because of "sequences of strong violence throughout" so good news for fans of the series. I assume "mom hips" was also a big reason but you can't very well come out and say something like that can you.

And sad news today my friends. Tony Scott, brother of Ridley Scott and director of such classics as "Top Gun ", "True Romance" and "The Fan" has died after taking his own life this past Sunday.

In all honestly I don't understand the concept of BBC America. It's the BBC... but it's in America? Doesn't BBC mean British Broadcast.... something with a C? How can it be in America then!? And why do they drink so much tea when coffee is so awesome? Let's forget about this for a second though and talk about "Ripper Street", a new show being made for the channel set in 1889 during the fallout from the Jack The Ripper murders. I bet they're going to drink a ton of tea on the show.

Little known fact, "True Blood" is one of the worst shows on TV right now. Well it's not on RIGHT NOW, but you get what I mean. Well I guess it could be on right now. Repeats or something. And I don't even know how to factor in On demand. Really the point here is Season 5 doesn't start for a while and Camilla Luddington, who you might know from "Californication" has just signed on to play a fairy on the show. On the plus side there's a 95% chance she's going to get topless on the next season because she already did on "Californication" and there's really no reason not to after you've done it once.

I did not see this one coming. Eddie Izzard has been cast in the role of Grandpa Munster in the upcoming reboot of the classic TV show "The Munsters", re-titled "Mockingbird Lane" if you're wondering. Seriously I didn't see it coming. I know I'm sarcastic a lot so I think I might not be getting my point across. I did not see this coming. 100% honest. 'Eff you for judging me.

Let's start with something fun. "The Grey" has been given the all systems go for a DVD and Blu-Ray release on MAY 22nd. There's going to be commentary, deleted scenes and god willing some interviews with actual wolves.

Is "The Grey" as bad-ass as Liam Neeson? 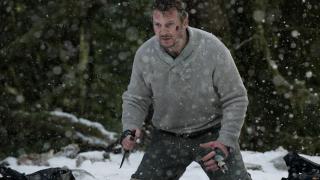 Liam Neeson throat punches the box office, plus the week ahead

What we're watching this weekend: "The Grey" + More Livestreaming tonight!

Mark this down, I am the first one to go on record as saying "Playback" is going to kick ass. Please keep in mind also I make this claim after doing zero research on the movie other than viewing the new trailer. But Christian Slater is in it and the movie's about some guy who filmed himself killing his family and then somehow mind travels into the body of some kid who watches the videos. Tell me that doesn't sound amazing? It's like "Shocker" meets "The Poughkeepsie Tapes" with a dash of some other movie I can't think of but will make me sound really legit once it comes to me.

"Chronicle" is a new flick about a group of boys who discover they have the power to move things... WITH THEIR MINDS! And what would any red blooded American teenage boy do if he got these powers? Figure out a way to look up girls skirts of course. Proof is in this new clip from the film. I hope I didn't spoil the end for you.

And here's a clip from "The Grey". A movie where Liam Neeson battles wolfs in the middle of the Alaska after his plane crashes. I don't know what it is but there's something about Liam Neeson telling a group of people to "be cool" that makes me feel like everything that's wrong in the world is going to be right. You ever get that? You will... you will.

Jamie Bell and Tilda Swinton look to be in talks to star in a new film from "Host" director Bong Joon-ho titled "Snow Piercer". Chris Evans is already on board for the flick which focuses on that last remaining people on earth who are trapped on a train after the second ice age comes. Because that's what people always say, when the end comes the only thing that will be left is cockroaches and trains. Or something like that.

Apparently my opinion means nothing because the National Society of Film Critics has named Lars Von Trier's "Melancholia" as their number one film of 2011. What that actually means I couldn't tell you but "Drive Angry" is nowhere to be found on the list so I'm calling the entire thing bullshit.

I continue to cover "Underworld: Awakening" news only because Eric has now already gone on record that it will be his number 1 film for 2012. So here's a new clip from the film for Eric to enjoy. It's got Kate Beckinsale blowing some crap up and running around in a cat suit. I assume at least. I didn't really watch them. These were specifically made for Eric.

The only thing I know about "The Grey" is that Liam Neeson fights a bunch of wolves in it. I have no idea what else anyone would want to know about the movie though because that's so bad ass it makes my tummy hurt. Just look at this new poster for the film. Neeson all bad ass in the snow and crap. Does your tummy hurt? No? Well I drank some Baileys that expired 3 years ago yesterday so that might be what's doing it for me. We may never know.

If you liked "Splice" then you're not me. Which explains why you never put in any sort of effort with the news. I should stop getting pissed at you I guess. But the director of the film, Vincenzo Natali, has been tapped to direct a new film titled "Haunter". The twist here is the movie is a haunted house story, but told through the eyes of a spirit haunting the house. Did your nose just start bleeding? That's because I just blew your mind.