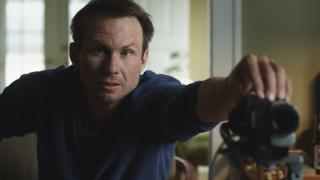 Edward Furlong and Christian Slater finally in a movie together? Sign me up! Alright this may have happened before, I just can't remember. But this time it's called "The Awakened" and is about a young woman who returns to her home town to find her mother's killer. Apparently there's some sort of Jekyll & Hyde tie in also. Who cares though. Furter! Or Slatlong. I don't know, we'll work on it.

If there's one complaint I get about my news it's that there's not enough coverage of what's going on over at the Lifetime network. Well today is your lucky day bed burners because the good lady folk over there have decided to move forward with a new series based on Melissa de la Cruz's novel "The Witches of East End". For those of you who have never had your monthly visitor the story focuses on a mother and her two daughters who just so happen to be next in the long line of witches. Queue Sarah McLachlan.

Looks like Jackie Earle Haley is the latest name to be added to the cast of the upcoming "Robocop" remake. Rumor has it that Haley will be playing the role of Maddox, the main man who trains Robocop with his new skills. I can't even think of something stupid to say here. This seems like a perfectly reasonable casting selection. Well done, Hollywood people.

There's more horror themed shows coming to the little screen in the near future then you can shake a stick at and today we've got word there's one more. "Sleepy Hollow", based on the classic headless horseman tale, is being put together by Alex Kurtzman and Roberto Orci, the same cats that brought you "Fringe". The project is still being pitched to the big wigs so it's not 100% locked in but if no one wants it I'm willing to toss a ten spot in and they can act it out in my living room.

Mark this down, I am the first one to go on record as saying "Playback" is going to kick ass. Please keep in mind also I make this claim after doing zero research on the movie other than viewing the new trailer. But Christian Slater is in it and the movie's about some guy who filmed himself killing his family and then somehow mind travels into the body of some kid who watches the videos. Tell me that doesn't sound amazing? It's like "Shocker" meets "The Poughkeepsie Tapes" with a dash of some other movie I can't think of but will make me sound really legit once it comes to me.

"Chronicle" is a new flick about a group of boys who discover they have the power to move things... WITH THEIR MINDS! And what would any red blooded American teenage boy do if he got these powers? Figure out a way to look up girls skirts of course. Proof is in this new clip from the film. I hope I didn't spoil the end for you.

And here's a clip from "The Grey". A movie where Liam Neeson battles wolfs in the middle of the Alaska after his plane crashes. I don't know what it is but there's something about Liam Neeson telling a group of people to "be cool" that makes me feel like everything that's wrong in the world is going to be right. You ever get that? You will... you will.

Jamie Bell and Tilda Swinton look to be in talks to star in a new film from "Host" director Bong Joon-ho titled "Snow Piercer". Chris Evans is already on board for the flick which focuses on that last remaining people on earth who are trapped on a train after the second ice age comes. Because that's what people always say, when the end comes the only thing that will be left is cockroaches and trains. Or something like that.

"I Saw the Devil" director Kim ji-Woon has lined up "The Last Stand" as his official entry into the world of English cinema. The movie will focus on drug lord trying to make his way down to Mexico and the sheriff hellbent on stopping him. Even better news it that Arnold Schwarzenegger himself will take on the role of said sheriff. Estaré de vuelta! According to Google that's "I'll be back" in Spanish.

Ray Liotta, Christian Slater and Ving Rhames in a straight to DVD thriller? Oh how the mighty have fallen. The movie is "The River Murders" and it's about a giant river that comes to life and murders people. Alright that's a lie, it's about a detective, played by Liotta, who is trying to hunt down a murderer who is taking out his ex-girlfriends one by one. I'm not sure I'd really work that hard to stop something like this. Sounds like someone's doing him a favor. Maybe send one of those Edible Arrangements.

Been waiting a long time for the next installment in the "Evil Dead" series? Well it looks like you might not have to wait much longer. Maybe. Word around campus is long time Sam Raimi collaborator and editor Bob Murawski has descended on Detroit to begin production on the film. If it's true it looks like the long delayed project could begin shooting sometime in the near future. If it isn't true I just look like I believe everything I read on the internet. Which I see absolutely no reason to stop doing.

Last week the internet was all abuzz with the rumor that Spike Lee might be hopping into the director's chair for the US remake of the Chan-wook Park's "Oldboy" and now it looks like he's officially been confirmed. So that happened. Feel free to go back to last week's news and read the hilarious jokes I put in the post about the rumor. I think there was something about America being awesome. Which of course is no joke. Rock, flag and eagle!