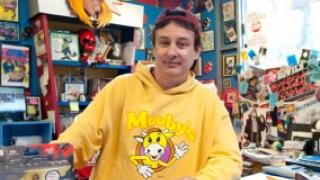 Walt Flanagan wears a lot of hats. He's the manager of a comic book store, a comic book artist (having drawn everything from the epic classic monster mash-up "War of the Undead" to Batman) the star of AMC's "Comic Book Men", and a co-host of the popular, multiple award winning podcast "Tell 'Em Steve Dave". This October, Flanagan (along with writer and co-creator Bryan Johnson) brings us "Cryptozoic Man".

Poster: Season 2 of 'The Walking Dead'

A fistfull of clips from the upcoming second season of "The Walking Dead" have hit the tubes and before you go getting all excited I should tell you that all of them are about ten seconds long. Not that you can't do some really good stuff in ten seconds. Sometimes ten seconds is all you need if something is really good. Ten seconds can completely please a woman... or viewer. Whatever. What were we talking about?

Showtime looks to be working on a new series titled "The Damned" which is based on the graphic novel of the same name. For those of you who think reading is stupid even if there's a bunch of pictures the story focuses on 3 demon families who run an underground soul trafficking circuit during prohibition. Not drinking ruins everything.

Regina Hall, Anthony Anderson and Kevin Hart are rumored to all be on board for the 2012 release of "Scary movie 5". Because we all demanded there be more "Scary Movie" films. Of course now we regret it. Man Harvey Wallbangers can really mess up an evening am I right? They can also cause people to think "Scary Movie 5" is a good idea.

Lily Rabe has squinty eyes and 20 credits on her IMDB, none of which I have seen, and now she's been confirmed for the cast of FX's new wack job series "American Horror Story". The new show will focus on a family that moves into a new creepy home in the aftermath of the fathers infidelity. Then they all put on rubber suits or something. I don't know the promo frightens me.

The Walking Dead Season 1 on Sale!

The website for the Guillermo del Toro co-written frightfest "Don't Be Afraid Of the Dark" has hit the tubes for your time wasting enjoyment. Normally I wouldn't give a crap about a website launch but this one is actually pretty cool. Spooky voices that whisper your name and some hot webcam action make it all kinds of fun. Although it's probably going to be a giant let down after I built it up with promises of "hot webcam action".

AMC has officially announced a four part mini-series based on Stephan King's "Bag of Bones", a story that focuses on a man haunted by the loss of his wife. Pierce Brosnan and Anabeth Gish are both confirmed for the project which begins filming next month. Proof once again that if you wait long enough every book will be turned into moving pictures. The point here is reading is dumb.

The first trailer for the live action role playing kiddnapping succubus flick (seriously) "Knights of Badassdom" has hit the net thanks to all things Comic-Con and it looks hella good, son. Do people still say hella good? Ya know, like that No Doubt song? Is No Doubt still popular? They broke up?! Oh god.

Be still my beating heart! Leonardo DiCaprio is confirmed to star in "The Devil in the White City", a new film based on H.H. Holmes, America's first serial killer. This will mark the first time I've ever had a man crush on a murderer. Mark this down.

Good news and bad news for fans of "The Walking Dead". The good news is the AMC series had a big ass premier with 5.3 million viewers. The bad news, that means instead of going out, getting drunk and going home with some random person you probably sat at home and watched TV. I've never been so proud and disappointed of you in my whole life.

I love every thing that comes out of Norway. Vikings, those weird ass black metal kids and that band that sang "Barbie Girl". Well add the new film "Inside a Whore", which has a new trailer online, to the list. I don't even know what it's about, I got so excited about the title I blacked out for a solid twenty minutes.

Still got "Let Me In" fever? Take a number kids! So here's a deleted clip from the film to keep your chops moist. Just to be clear though, if you're taking a number I think only 17 people went to see the movie so the line might not be too long. 17 people counting the five of us on the podcast. And no, we won't be in the line.