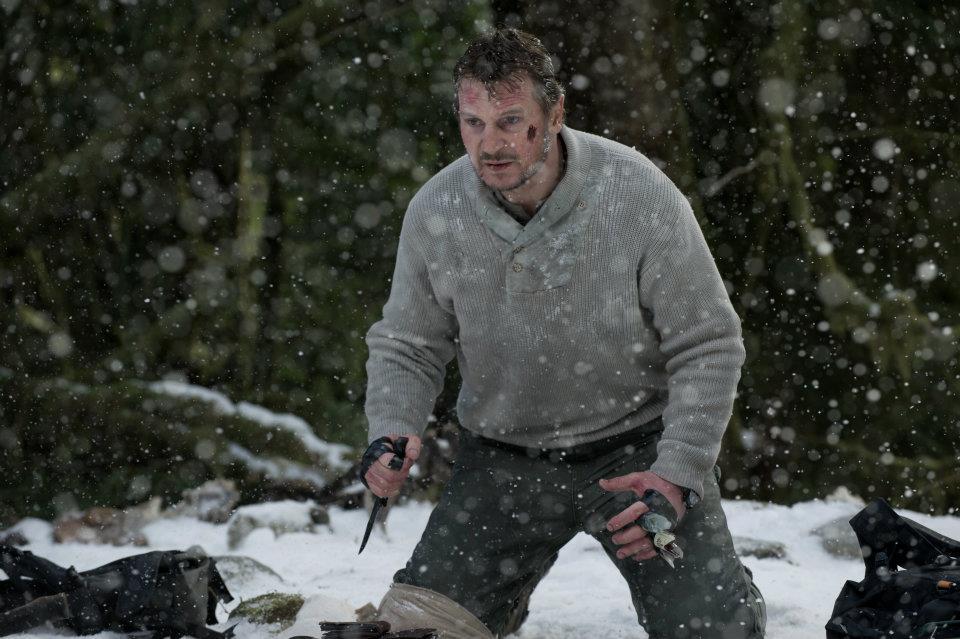 In the best way possible, “The Grey” is a ‘B’ movie dressed in an ‘A’ feature’s aesthetics. Since the first release of its trailer and marketing materials the film had the faint scent of a higher-brow exploitation offering; a film with a decently sized budget which knew how to craft some novel and exciting moments blending just the right amount of absurdity and realism. The film’s director and co-writer Joe Carnahan has had experience with both independent gritty-realism in “Narc” and boisterous, crowd-pleasing violence. The giant, serio-Neeson-faced poster knew the type of crowd the studios were looking to attract. The dual generic setups of man pitted against nature and groups of men under stress echo a long tradition of adventure stories and pulp, exploitation narratives. The tagline “Live or Die on this Day” and the film’s emphasis on the practical means of survival speak to the prolific success of survivalist TV shows and movies, further capitalizing on the success of a particular trend. But while the film does excel at crafting many genuinely thrilling set pieces and grim suspense—with its surprisingly fair share of jump scares—it also makes some ambitious attempts to be an existentialist parable on humanity’s perception of death and survival.

“The Grey” opens on an isolated oil drilling facility in the arctic Alaskan wilderness. The atmosphere is crusted in layers of snow, cold, and endless expanses of white. Ottway (Liam Neeson) is a security man in charge of protecting the workers from the Alaskan wildlife. When not out patrolling for wolves to shoot (natch), Ottway mourns a presumably defunked romance with an unnamed girlfriend or wife whom we see in flashbacks, tenderly caressing his face in bed. All the while the rest of the workers at camp spend their time either drinking alone or fighting each other. In Ottway’s narration we hear how most of the workers are either ex-convicts or drifting souls looking to get lost, an observational detail that oddly seems to hold true for only one of the characters. We watch as Ottway isolates himself in camp, refusing any offer of human connection, drifting through the icy world with a grim stare. But when a plane carrying the workers to Anchorage for leave crashes, Ottway is forced into a leadership position. Assuming control of the situation, he organizes the men for a march south toward civilization. However, problems arise when the men realize they are being stalked by a pack of wolves. The group begins their perilous journey, battling the elements, the terrain, the relentless pursuit of the wolves, and their own psychologies.

This survivalist narrative is merely a frame from which Carahan is capable of exploring the complex human emotions that arise in the face of fatal situations. Few other popular adventure-survivalist films have been capable of capturing the complicated relationship of sensory and emotional material that we see here. The arc of ex-convict Diaz proves to be astutely indicative of this dichotomy that at once requires our characters to seek salvation through violence and physical challenge but also asks us for what reasons. Rather than taking survival for granted, asking us as an audience to assume these characters all have something to live for, the film asks the difficult, provocative question of what exactly we are attempting to uphold.

In this sense, “The Grey” is much more concerned with how masculinity works in relationship to a violent environment. In a way, “The Grey” is an iteration of the West mythos in which men committed to their capacity for violence are capable of surviving. And while the Western is more concerned with codes of law, the men in “The Grey” are faced with a challenge that lies beyond institutions. The film adeptly draws from an instinctual horror that builds from the primal sounds and sights of the wilderness to both catalyze the individual’s desire to escape but to also provoke them to consider the seemingly obvious question of “why?”.

But despite the film’s technical prowess and some truly harrowing moments, the film relies too heavily on some pretty trite sentimental material. Throughout the film we watch flashbacks of Ottway and his unnamed wife staring at each other in what looks like a sun-drenched bedroom. What motivates the rest of the men are their connections to heterosexual relationships or their commitment to their young children. I can see how Carnahan utilizes these clichés to more acutely focus our attention back to the present struggles of the survivors and their wills to continue. However the instances in which these images and memories are used to motivate characters becomes a touch exhausting. The fact one character chooses to die ostensibly because he does not have a family life is slightly infuriating.

Carnahan also seems unwilling to explore some more controversial territory in the way of social commentary. The connection between oil drilling as a resource for modern conveniences and the violent, high-stakes pursuit for survival is never really explored. This connection for Carnahan feels relatively superficial, a circumstantial detail thought up just to get the characters into Alaska. At a time when environmental and resource issues are becoming as much of a dire topic in public discourse as unemployment, this seems an odd omission given the film’s setting and character histories.

Still, I found much to enjoy in “The Grey’s” play with tone and it’s characters motivating forces. The film is full of some truly memorable, viscerally intense imagery without becoming overly stylized and calling attention to itself over the more compelling material. It is an effective, often emotionally taxing piece of action filmmaking that looks for comfort or at least contentment in the face of our destruction. Carnahan is willing to ask some difficult questions and it is refreshing to see a filmmaker let these questions breathe, knowing that he can’t entirely answer them. But while the film does provide some interesting, dystopian suggestions, it relies too heavily on some more traditional and uninspired sentimentality that keeps from elevating it into something more intriguing.