No surprise here, Yvonne Strahovski will reprise her role as the flower sniffing killer tart in the 8th season of "Dexter", which is set to premier on June 30th. I would of liked a surprise to be honest. Like maybe they replace her with that guy from "Chuck," but don't say anything about it. All of the sudden Dexter is banging the guy from "Chuck". Boom, surprise.

When you think Jamie Foxx you think horror. It's a fact. That's why he's going to be bringing a yet to be named anthology series to Syfy in the near future. Foxx will apparently write, produce, and direct the series and possible make a few guest appearances. If he was only a hansom debonair gentleman I'd be inclined to call Mr. Foxx the full package. Oh wait. He is. Wink wink, boys.

I feel like you don't hear much about "The Bermuda Triangle" anymore. In the 80's you couldn't spit without hitting a TV special on the mystical location, but it's been years since Geraldo even mentioned the place. But now Warner Bros. has picked up the rights to a new film focusing on the location for your to polish your mustache to. No real details have been released on the flick, but if I was a betting man I'd say a boat or a plane gets lost and then stuff happens. Just guessing here though.

"Insidious: Chapter 2" has been given a September 13th release date of this very year. Get it? That's Friday the 13th. Cause the movie is spooky and Friday the 13th is a spooky day. Spooky things.

I love me some "Robocop" remake updates. You know this about me. I've said it countless times. Need proof? Gaze upon my rock hard nipples while I tell you that Jennifer Ehle, who was in "Contagion", has signed on to join the cast. She'll play someone named 'Liz Kline'. I don't remember who that is from the original. But you're not thinking about that anyway are you. You're thinking you want to see me cut glass with these puppies. Well keep waiting.

Oh how the mighty have fallen. 13 years ago M. Night Shyamalan was our love child and today we get news that he's working with Syfy on a new pilot titled "Proof". "Proof" will focus on a young man who offers money to anyone who can prove there's life after death when his parents die tragically. I can only hope Tiffany will pop up in the cast somewhere.

Little known fact, I am not the German kid in that popular internet video where the kid freaks the F out while playing "World of Warcraft". I know it's an honest mistake, I get it all the time. I've never actually played the game but apparently people go nuts for it but the obvious big screen version has been riddled with problems. Well today's there's some good news for the project in the form of Charles Leavitt being tapped to write the script. I think that's good news. I mean he wrote "Blood Diamond". You basement dwelling virgins should be pumped he'd touch your silly game.

At this point I'm at a loss as to who looks at Brendan Fraser and says "Yeah, get that guy in my movie" but yet again he's been cast. This time in "Split Decision", a new film about two children being hunted by a couple murderers after they accidentally witness the killing. Fraser will play the father who tries to save them. Alright I can't even lie, I find the guy charming as crap. Did you see "Looney Tunes: Back in Action"? I can't not watch that whenever it's on TV.

Trailer: "Leprechaun's Revenge" Has Billy Zane In It. That Is All.

Franck Khalfoun, who directed "P2" and apparently loves fedoras is being eyeballed to direct the remake of the much loved 1980 classic "Maniac". For those of you who are not up to date on the film it follows a serial killer who takes out his mommy issues on a bunch of women in NYC. Who can't relate to that.

I have no idea what "The Girl With the Dragon Tattoo" is about but everyone and their mother seems to be gaga over the books and excited about the movies. Now here's the first still from the film and I can officially confirm that I have no desire to know anything about this movie or book because I assume it's about crack whores with stupid face piercings I can not support that. If you do you hate freedom and apple pie.

Scott Ian is a guy you know from every shitty VH1 show where they reminisce about some crappy decade but may be surprised to know is actually in a band called Anthrax. Well now Scott's also a full fledged zombie because he's been transformed for "The Walking Dead" web series. He sounds really excited about it and blogged the crap about his experience with pics to boot so enjoy. Am I the only one who only liked John Bush era Anthrax? I can't be. Joey Belladonna's perm makes me uncomfortable. 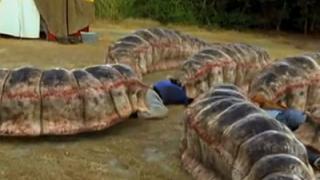 I could have sworn this already happened but apparently "Screen Gems" has acquired the rights to the big screen adaptation to the much loved video game "Devil May Cry". For those of your not familiar with the games there's a guy named Dante, a giant sword and some demons. That about covers it I think. Wait, no! There's a gun too.

Chris Sparling wrote "Buried", the best Ryan Reynolds trapped in a box movie of 2010, and now he's stepping behind the camera with a little ditty titled "Falling Slow". The film will focus on a couple, played by Mandy Moore and Rodrigo Santoro, who move into a haunted apartment. If I was a betting man I'd say any movie with someone named Rodrigo in a starring roll is going to be 100% caliente.

Tobe Hooper, who I believe created a low budget rip off of that chainsaw flick that came out a few years back, has been confirmed to direct a new supernatural thriller titled "Djinn". Djinn is apparently some sort of Arabian demon and I guess in this movie that demon does some nasty crap to a couple's apartment after they return from their trip to the US. I'm not positive but it sounds like this movie might not be patriotic.

What's more prestigious than making a crappy Syfy flick? Making the 200th crappiest Syfy flick of all time! Well the new After Dark opus "Scream of the Banshee" will have the honor on March 26th. That's all really need to know but if you're looking for plot just think banshee scream, then you die. That about covers it.

For those of you who have been anxiously awaiting a remake of "The Gate" there's good news and bad news. The good news is they've gone into pre-production so there is in fact going to be a movie. The bad news is there won't be any filming in the near future because apparently all the 3D magic going into the production is going to take a long ass time to set up. It's called ying and yang folks, Google it.

"Choose" is a new indie horror flick that apparently opens with a girl having to decide which parent a slasher kills. The new trailer is up on the tubes and looks pretty awesome I must say. Unfortunately there's no US release date yet for us while the UK already has this one sitting on their DVD shelves. But fear not, I think they still love techno music over there so everything kind of evens out.

What the hell After Dark Originals?! I get all excited about your films and then I found out tha "Husk" will be hitting the airwaves this weekend on Syfy. You can't show nudity on Syfy, you can't show guts flying on Syfy and you sure as hell can't have a good movie on Syfy. Except the ones with Debbie Gibson in them, those things are freakin gold.

I don't care if you think Joaquin Phoenix is a jackass that man has got talent. And not the sarcastic type I usually make, the guy is an awesome actor and now he's supposedly the front runner to play our former president in the big screen version of "Abraham Lincoln: Vampire Hunter". Seriously, did you see "We Own the Night"? I will fight you!

A new red band trailer for "Let Me In", the US remake of the Swedes "Let the Right One In" has found it's way online. At this point I've run out of clever ways to say how much I hated the original so let's just accept that we're American and we're better than everyone else. Let freedom ring.

Twenty years ago the newly released clip of Tiffany and Debbie Gibson having a cat fight for the Syfy flick "Mega Python vs. Gatoroid" would of made my Jams all kinds of tight. But I haven't worn Jams in close to twenty years so now it's just making my big boy shorts tight. See how that didn't turn out like you hoped it would?

After very much not being released back in March the Nic Cage film "Season of the Witch" is now seeing some re-shoots. Since they're going back and redoing some scenes why not toss in John Travolta and have him switch faces with Nic. Then have the two of them race around the country looking for secret treasures hidden in national landmarks. You're welcome Lionsgate, you can keep that one.

Hot news out of Comic-Con this past weekend that the much delayed film "All the Boys Love Mandy Lane" may be getting a release in the near future. By this point I'm sure most of the boys have moved on from Mandy to the skeezy girl down the street.