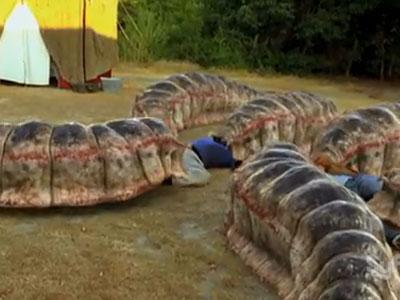 I loved the movie “Tremors” as a child. I really don’t know why. There was something about Kevin Bacon and some hillbilly survivalist out-running and fighting giant worm monsters called Graboids that really spoke to five year old me. It’s kind of always been a sentimental favorite of mine, even though I haven’t watched it in at least ten years. When I got the DVD for “Mongolian Death Worm” sent to me, the first thing I thought upon looking at the cover was “huh, this looks like a shitty version of “Tremors””. Then I watched it. I would never disgrace the good name of “Tremors” by saying that again. “Mongolian Death Worm” is far, far worse than being just a shitty version of “Tremors”. “Mongolian Death Worm” might be the most by-the-numbers, flat and boring Syfy Original I’ve ever seen. Let that sink in.

I’ve seen enough Syfy Originals now to where I can recite the basic plot of each and every one to you. They all revolve around some sort of monster. That monster is either the product of, or unleashed by, some evil multi-national corporation. That evil multi-national corporation refuses to kill the monster because it is either their product, and therefore represents millions of dollars of research and development that must be recouped, or would somehow disrupt the production of whatever it is they do. Sometimes some supernatural, historic artifact or site is involved. Our protagonists are either some sort of rapscallion scofflaw or a retired military type that pairs up with a female doctor or scientist and her companion, that’s either a total pussy or a bumbling comedic relief. That said, here’s “Mongolian Death Worm” in that framework:

Seriously. Play this game at home. It’s amazing how well it works.

There are a few things that “Mongolian Death Worm” does to distance itself from its other Syfy Original cousins, though most are detrimental. For one, there’s the actor who’s so bad it sounds as if he’s singing every line. Haven’t seen something that bad before. Secondly, the whole thing takes place in Mongolia, which looks an awful lot like Texas to me. Granted, I’ve never been to Mongolia, so who knows, maybe the two really do look a lot alike. There’s an asian sheriff (you know, to remind you that this occurs in Mongolia and not Texas), who speaks with a southern drawl and wears a cowboy hat. Wait, are you sure this wasn’t supposed to take place in Texas?

Oh no, there’s the village of diseased asian people, definitely Mongolia. Thanks for the vaguely racist reminder Syfy. Ever notice how many times I use the phrase “vaguely racist” when talking about Syfy Originals? Curious. There’s some true greatness in these scenes though. All the male doctors are wearing scrubs because, you know, they’re treating people with ebola or some shit like that. The females doctors? Tank tops and short shorts because, you know, they have cleavage and butts and Syfy Originals will stoop to the lowest of lows to get people to stick around for one commercial break. Gotta get those ads sold.

But why are these scenes in this movie? No clue. The plot of “Mongolian Death Worm” is so paper-thin and flimsy that the driving action is seemingly cliche. Why are there disease camps set up? Well, it’s Mongolia. There’s gotta be villages just teeming with sick people there. Why does the Asian cowboy sheriff take off, leading him to set the rapscallion and the doctor up together? Because he’s gotta go break up a fight over a goat. It’s Mongolia, that shit happens. Why does one of the oil company executive stage a coup to take the company over? Because he’s evil. Obviously.

“Mongolian Death Worm” is also phenomenally boring. Instead of just embracing it’s shittiness and revelling in an hour and a half of stupidity like a half-Shark, half-Octopi tearing shit up or ware-hyena women fighting with foggy nipples, “Mongolian Death Worm” tries to take the serious route and attempts to play as an allegory for last Spring’s (and Summer’s and Fall’s) BP oil spill disaster and peak oil. Instead of being subtle or reserved about it, “Mongolian Death Worm” takes the “Sesame Street” approach. For example, when we discover that the oil drilling sight is actually drilling oil shale, our doctor character (suddenly an expert in all things oil related) launches into what oil shale is, how it works, why it’s bad for the environment and explains the concept of permafrost and trapped carbon. I like intelligent movies, I have no problem with this message, but I hate blunt force deliveries. I also hate when movies called “Mongolian Death Worm” take themselves seriously and try to have a political message. If you can’t even get me to believe that your actors can act, why would I ever want to hear you wax political about anything?

“Mongolian Death Worm” is about as bad as Syfy Originals come. I can’t see why anyone would watch this movie at 3:00am on a Saturday while trying to sober up, yet alone consciously choose to sit down and watch it. While there may be a chuckle here or there, they’re absolutely not worth sitting through this film to get. Ultimately, it feels like exactly what it is, a film that was cranked out in a factory to merely justify the low-cost sale of a two hour block of ad space. And that’s obviously not worth your time.