No surprise here, Yvonne Strahovski will reprise her role as the flower sniffing killer tart in the 8th season of "Dexter", which is set to premier on June 30th. I would of liked a surprise to be honest. Like maybe they replace her with that guy from "Chuck," but don't say anything about it. All of the sudden Dexter is banging the guy from "Chuck". Boom, surprise.

When you think Jamie Foxx you think horror. It's a fact. That's why he's going to be bringing a yet to be named anthology series to Syfy in the near future. Foxx will apparently write, produce, and direct the series and possible make a few guest appearances. If he was only a hansom debonair gentleman I'd be inclined to call Mr. Foxx the full package. Oh wait. He is. Wink wink, boys.

I feel like you don't hear much about "The Bermuda Triangle" anymore. In the 80's you couldn't spit without hitting a TV special on the mystical location, but it's been years since Geraldo even mentioned the place. But now Warner Bros. has picked up the rights to a new film focusing on the location for your to polish your mustache to. No real details have been released on the flick, but if I was a betting man I'd say a boat or a plane gets lost and then stuff happens. Just guessing here though.

"Insidious: Chapter 2" has been given a September 13th release date of this very year. Get it? That's Friday the 13th. Cause the movie is spooky and Friday the 13th is a spooky day. Spooky things. 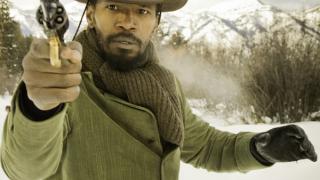 Sophisticult rejoices: Tarantino is back!