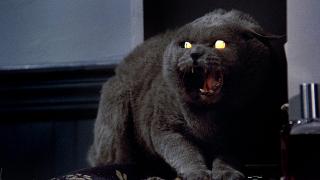 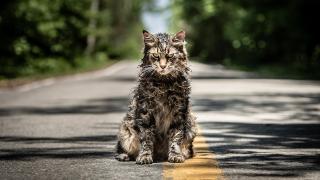 The good folks behind the new "Hitchcock" flick, about the relationship between the legendary director and his wife during the making of "Psycho", have launched a new site where you can insert yourself into the film's poster. The film doesn't hit theaters for another few weeks so hurry up and you might be able to convince your dumb cousin that you're actually in the movie.

"Castle Wolfenstein", the classic video game that spawned numerous sequels and was a leading cause in me not seeing sunlight as a child, is finally making it's way to the big screen. Roger Avary is already locked in to write and direct the film about a US army captain and a British special agent who battle the SS paranormal division in a plot to take down Hitler. Sounds like every kid's dream.

A new documentary about the making of 1989's classic horror film "Pet Sematary" is in the works. Currently titled "Unearthed & Untold: The Path to Pet Sematary" the doc will feature cast and crew interviews, visits to filming locations and a look at the film's reception. I swear to god I still have nightmares about Zelda. Did you even notice she kind of looks like Bethenny Frankel? I'm sorry that's awful.

If I were to give you 100 guesses as to the plot of the new film titled "Cold Patrol" I don't think you would come anywhere close. That's because it's about a team of military dog sledders who end up battling zombie polar bears. You read that right. Oh sure now you're saying you would have guessed that somewhere around 47 or so but that's bull crap. You've always been a filthy liar. Look for this one on DVD sometime in Spring of 2013.

Booo Paramount, boo! Apparently there's been a "Pet Cemetery" remake in the works for some time now but up until recently it wasn't getting much action. But now it looks like a script is almost done and a director search is moving forward. Matthew Greenberg, who wrote the script for King's "1408" as well is just about done with his new updated version of this sucker.

I don't know if this is suppose to be good news but Wes Craven says he isn't re-shooting scenes for "Scream 4" but actually adding pivotal scenes. So just to confirm, he watched his movie and didn't see scenes that he thought could be better or done different, no he saw scenes that were completely missing all together. I'm not good with math or words but honestly I think the re-shooting sounded better.

MTV has announced that their new series based on the 90's classic "Teen Wolf" will hit the air on June 5th. Based on everything I've heard about their latest show "Skins" I am fully expecting this one to feature full frontal nudity and partial if not full penetration. I'll consider anything less a complete failure.

According to MTV, Wesley Snipes would like to see a “Blade 4”. Sadly, no one else does. (OK, that was mean. The truth of the matter is that I love all three “Blade” flicks and would love to see a fourth. Sometimes the prerequisite cynicism of this gig eats away at me, forcing me to do or say things I don't mean to. Mr. Snipes, please, if the offer arises, make a new “Blade” and I will be first in line, no questions asked. (This promise also applies if you make “Passenger 58” or “Jungle Fever 2: Still Cravin' That White Meat”.))

I know that, because you're an imbecilic horror fan, you probably only listen to bands like Magick Karkass and Devilwhipper, but, if you can expand your musical horizons for two Goddamned minutes, neo-outlaw country singer Shooter Jennings' latest album, “Black Ribbons” is out. Why should this appeal to the oh-so-picky likes of you? Because “Maximum Overdrive” director Stephen King narrates the anti-New World Order-themed album as radio DJ “Will O' the Wisp”, who is about to lose his job as the airwaves is overtaken by 'government-approved and regulated transmissions.' I'm taking a moment to be serious here: this is a damn good album and, quite honestly, better than anything you're listening to right now.