john dies at the end

In some universe, this show was orderly... 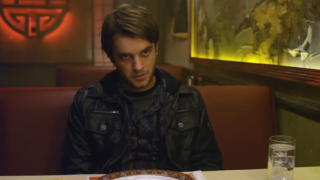 Did you ever read that book "My Brother Sam is Dead" in middle school? I didn't but I was suppose too. I'm really sorry Mr. Reynolds... you creepy mustached SOB. Well "John Dies At the End" is nothing like that book but today it's got its first poster with all kinds of skull goodness. The movie tells the story of two college drop outs who are trying to stop an onslaught of terror brought on by a strange drug that hits the streets. I just used the word onslaught.

I'm going to address this one directly to Mark because he'll probably be the most excited about it. Hey Mark! Good news. They're rebooting the "Mortal Kombat" franchise with a new film based on the popular web series "Mortal Kombat: Legacy". One catch though. It's going to be directed by Kevin Tancharoen, who did direct the web series but also the "Glee" 3D movie and "Fame" remake. Anyway! How have you been? How's Chicago? Have you been to Millennium Park yet? I hear it's wonderful this time of year.

And lastly Johann Urb, who rivals Sarah Jessica Parker for longest face in Hollywood, has signed on to play Leon Kennedy in "Resident Evil: Retribution" along side Milla Jovovich and her mom hips. So that's some exciting news huh? Got any plans for the weekend? Fall is finally here! You look fat in those jeans.

Danish filmmaker Ole Bornedal is confirmed to be directing the Sam Raimi produced film "Dibbuk Box". The movie is apparently based on real life events that happened to a family who came into possession of a haunted box. I'm not sure how big the box was but one possible solution could have been to just throw it out. I'm just tossing out ideas here though.

Wait there's a remake of "The Crow" in the works? Why didn't anyone tell me about this? Time to bust out my skin tight leather pants! I hope they still fit, it's been over 15 years. Oh and Stephen Norrington, the director who was attached to it said he's left the project. But still, "The Crow" remake!

Now I'm going to address the fine people behind "The Frankenstein Syndrome" When you cast Tiffany Shepis in your movie I have some expectations of what I'm going to see. I'm not going to say what those things are but you take a look at these new stills from the film and try to guess. Here's a hint, it isn't a creepy mask covering up her face... or a creepy shirt.

Don Coscarelli, the guy who brought us "Phantasm" and "Bubba Ho-Tep", has officially been tapped to direct David Wong's "John Dies at the End". The cast right now also includes Paul Giamatti, Clancy Brown, Angus Scrimm, Chase Williamson, and Rob Mayes. I assume one of them will play someone named "John" who will most likely die at the end of the movie.