I will literally believe anything Paul Giamatti tells me. He could walk up to me right now and tell me the sky is green and I'd high five him and say, "Right on! I love your movies". So if he tells me that "Bubba Nosferatu: Curse of the She-Vampires" is still going to happen then I believe him. The film would be a sequel to 2002's "Bubba Ho-tep" and Giamatti would play Colonel Parker, the former manager of Elvis. How awesome would it be to have Giamatti as your personal life manager? Just wake up and he tells you what to eat and stuff? He's not in the best shape so that might not work out but still. He seems like a nice guy.

Good news kids. "The Walking Dead" has officially been picked up by AMC for a fourth season. But there's some bad news also here. Glen Mazzara, the guy who replaced Frank Darabont as the shows driver, has left the show as well. No word yet on who will replace him but word on campus is the reason for the split is a difference of opinion between Mazzara and AMC. Really just makes me think how happy I am that Eric and I came to an agreement on who should be the drunk one on the podcast pretty quickly.

I'm just going to come right out and say it. I love the movie "Mean Girls". I guess a lot of people do though so I'm not really admitting anything crazy here. Whatever, I'm sorry I let you into my soul now. The reason I bring up the film is because it's director, Mark Helmer, has been tapped to direct a new coming of age vampire flick titled "Vampire Academy". Based on the book with the same name the story tells the tale of a young lass who travels to a hidden school where she learns the ways of a special breed of vampires who can walk in the daylight. Honestly this sounds like some sort of Skinamax flick and I pray they land Lindsay Lohan as the lead. 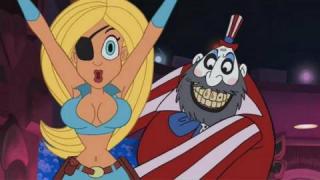