Been a while since you heard us giddy... 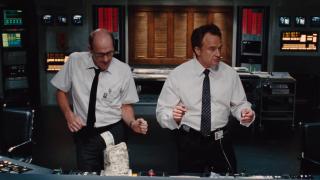 Clips: "The Cabin in the Woods" conjures "The Evil Dead"

Dwayne Johnson, also known as "The Rock" just seems like a guy I'd like to hang out with. He's all funny and stuff. God I hope he drinks beer. While we try to find out let's discuss how Mr. Rock is now in talks to play the lead in a big screen adaptation of Steve Moore's graphic novel "Hercules: The Thracian Wars". Can you guess what the lead role is from the title? If you can't you might be stupid.

I really dislike that song "In Your Eyes" and therefore I have already decided I do not like the new movie coming out with the same title. It does not matter that Steve Howey, who's currently on the show "Shameless", has been added to the cast. I don't watch that show. It does matter that Joss Whedon is producing the romantic supernatural people connected by some cosmic energy movie. Because everything that guy does is awful. But I'm just rambling now.

Robert Knepper who was on "Prison Break" has joined the cast of CW's "Cult" about a cult leader who commands his minions to kill. I'm sick of these shows already.

I've seen trailers for "Madison County" flying around for a while now. It's the creepy looking flick about a killer who terrorizes a town while wearing a pig's head if you're wondering. And it looks like it's finally making it's way to DVD on May 8th. See? Today's not so bad. This rain will pass. Let's go get some breakfast together, ok?

Snapshots: "Cabin in the Woods", still no idea

If you're not in the know like I am then you're probably clueless on "Hunger Games", a movie based on a book where kids are sent into a giant playing field and made to battle to the death. Well since it's based on a book and the movie is going to make the kids go gaga it's only stands to reason that the books would now be re-released with the hot teen heartthrobs adoring the cover. So here they are, the new hot sexy covers. I just used the word adorning.

When I was a kid and I popped in a VHS tape I knew I was in for a good time when I saw the Cannon Films logo come up. The "American ninja" movies alone filled up at least 3 years of a young Joe's life. And don't get me started on how much I loved the "Breakin'" films. Sadly, Cannon Films is gone but Documentary film maker Mark Harley is paying tribute to the classic video company with a new flick titled "Electric Boogaloo: The Wild, Untold Story of Cannon Films" which has just been picked up by Drafthouse Films for distribution. Seriously, you should have seen my fat 6 year old ass trying to break dance. It would've made you throw up.

"Cabin In the Woods" is a new horror flick from Drew Goddard and Joss Whedon about a guy who goes to a cabin with some friends and then finds a bunch of weird awful crap. I know that makes no sense but that's what we've got for a plot description. Want to get even more confused? Check out the new poster for the film. It's got a cabin all messed up like a rubix cube or some crap. I don't even know why I'm telling you this. Seriously, I was so fat and I was trying to do a head spin.

America may have never have gotten over the whole Tom Cruise going crazy thing but no one can deny that's he's just so tiny and adorable you want to lock him in your closet and keep him for your own. Every morning you'd wake up and peek inside the closet to see little Tom Cruise sleeping on the tiny little bed he's chained to. At night you'd dress him up in doll clothing and put on elaborate dinner shows with him as the star. All the while knowing that you've got one of Hollywood's top leading men as your little tiny man doll. It would be a dream. Anyway, Tom's going to star in "All You Need Is Kill" as a solider who gets trapped in a time loop when he's killed. I think I've said too much.

I don't want to get your hopes up but I think Heath Ledger may be alive. Or at least it looks like he may make an appearance in the next Batman film via unreleased footage from the last movie. But let's go with Zombie Ledger, it sounds cooler. What, too soon?

All the world has Monica Keena fever right now. I mean did you see "Night of the Demons"? Action! And now she's been cast as a cult member in "Manson Girls" along with Laura Harring, Patti D'Arbanville, Estella Warren and Stella Maeve. Who's excited now? I don't even know what it's like to not be sarcastic anymore. Please help me.

Why the hell are people still talking to Joss Whedon about the freakin' "Buffy the Vampire Slayer" remake? I don't know folks but apparently now he is saying that he was offered to be a part of the film and passed. I can't wait to see what comes out next week so I can put it in the news and complain about it.

Here's the cast and a promo video for the new Syfy series "Being Human" which is the first thing I've seen on that channel that didn't feature a giant something or other. Unless you count Sam Huntington's forehead. I mean am I right? Anyway the show is about a ghost, a vampire, and a werewolf all living together and trying to cope. With sexy results!