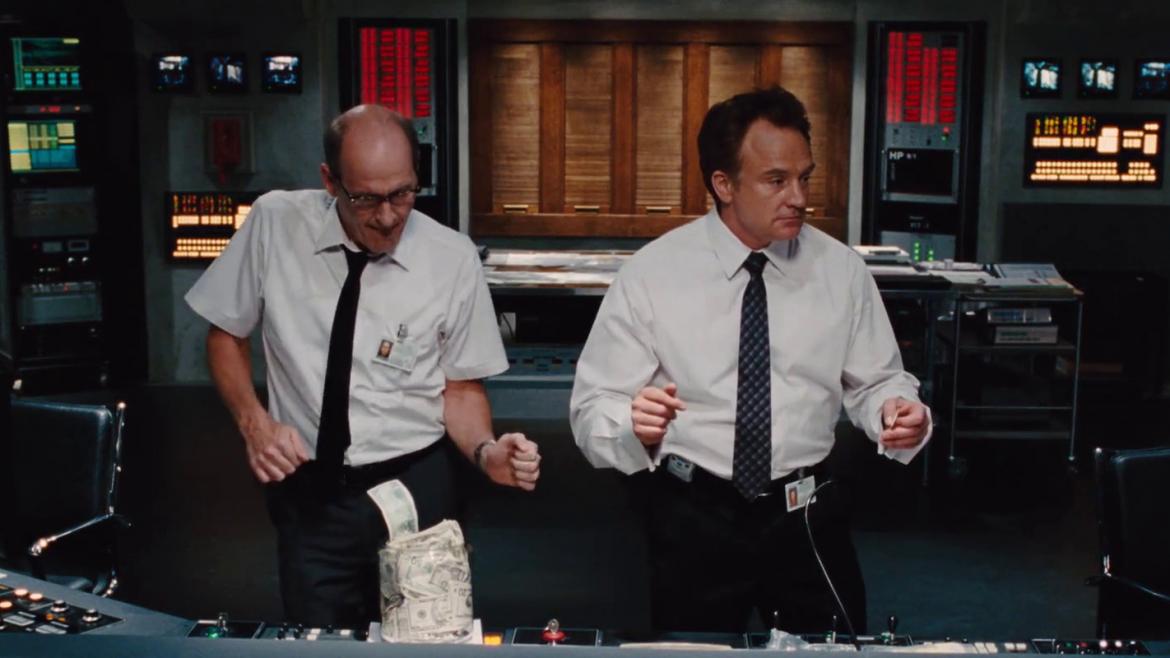 The Cabin in the Woods (Movie Review)

If it weren't already taken by a decidedly less impressive film, then "The Cabin in the Woods" could very well have been named "The Last Horror Movie". It would very neatly sum up what this flick seems to be aiming to accomplish.

"Cabin" is the directorial debut of "Lost" writer Drew Goddard, who wrote the script with "Buffy"/"Firefly"/"Avengers" mastermind Joss Whedon. It concerns a group of college kids who venture out to a cabin for a weekend full of the kind of illicit fun teens are known for. There's more to it than that though... As we've seen in the trailers for the film, there is another entity at play here as well. There seems to be some type of shadowy, science fiction-esque team of G-men watching the proceedings from a very high-tech looking control room.

In fact, before we even meet the teenagers, we meet the "men behind the curtain", played wonderfully by veteran actors Richard Jenkins ("Stepbrothers") and Bradley Whitford (probably best known as "Eric" from "Billy Madison"). From their underground lab, we quickly learn that they possess God-like control over the teen's surroundings in the woods, and have been following them for weeks (or possibly months) fine tweaking things around them in order to push the group to their final destination... ie, the titular "cabin". In case you haven't guessed by now, the tone of certain aspects of this film might be construed as a little silly. It's okay though, my advice is to just go with it, you'll be happy you did.

Just why they're luring these teens to their brutal deaths, or what their end-game is, is irrelevant to the review. What's more relevant is their role as overseer and in a way, proxy for the audience watching. They come off as office drones of the highest order, comically bored and jaded about their jobs even though they essentially involve butchering hapless teenagers, and as we find out later, something much more important.

What makes "Cabin" so fun however is that they're also stand-ins for a generation of jaded horror fans. Just as the audience is laughing at the cliche'd action playing out in the cabin, so are the overseers, in addition to a myriad of other office workers shambling through the lab. It's a setup that could have been doomed to fail were it not for two things; the impeccably written dialog, and the spot-on delivery of two very experienced character actors. Make no mistake about it, this is not Kevin Williamson packing pop-culture references into the latest "Scream" sequel, this is two very well versed horror fans (Whedon and Goddard) skewering, and paying homage to, the genre they love. The fact that they're able to pull it off with some impeccable comic timing is just the cherry on top.

When we do jump to the teens, the action pivots back and forth between brutal scenes of gore and violence, and humorous moments watching them try to react to forces they don't realize are conspiring against them. It's like an elaborate game of mousetrap, where we are the only ones in on everything happening on the board. The result, mixed with a talented group of young actors, is the type of "fun" horror movie maybe not seen since the late 1980's.

Were it to stop with this game of cat and mouse, I probably still would have given it a rave review. However, "The Cabin in the Woods" ultimately reveals itself to have stashed an entire deck of cards up its sleeve for the third act. Without giving away too much, Whedon and Co. basically manage to skewer every horror film and genre that has ever existed, while making a masterfully fun movie in the process. When it's all over, you'll probably be left asking the same question I was... where do horror films go from here?