cabin in the woods 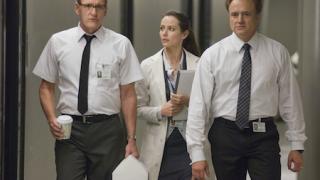 Here's what the new Robocop looks like. I'll save you the time it takes to click... it's not even silver! What the hell are we doing here, people...

Anchor Bay has acquired Rob Zombie's "Lords of Salem" after its debut at the Toronto International Film Festival last week. Thank God they use the acronym TIFF, because typing the entire name makes me want to quit life.

Check out The monsters you missed in "Cabin in the Woods". I made my wife watch this on Bluray with me last night. She just looked confused. Me on the other hand? I'm calling it now, horror film of the year. Everyone else should go home and feel bad about themselves.

Here's the new Norman Bates that will star in A&E's "Bates Motel". I will continue not watching horror on television because it will always be terrible.

Tom Savini's "Night of the Living Dead" remake from 1990 is coming to Bluray. If you haven't seen it, you should, it's pretty fantastic.

What we're watching this weekend: Dispatches from podcast land

Clips: "The Cabin in the Woods" conjures "The Evil Dead"

Snapshots: "Cabin in the Woods", still no idea

If you're not in the know like I am then you're probably clueless on "Hunger Games", a movie based on a book where kids are sent into a giant playing field and made to battle to the death. Well since it's based on a book and the movie is going to make the kids go gaga it's only stands to reason that the books would now be re-released with the hot teen heartthrobs adoring the cover. So here they are, the new hot sexy covers. I just used the word adorning.

When I was a kid and I popped in a VHS tape I knew I was in for a good time when I saw the Cannon Films logo come up. The "American ninja" movies alone filled up at least 3 years of a young Joe's life. And don't get me started on how much I loved the "Breakin'" films. Sadly, Cannon Films is gone but Documentary film maker Mark Harley is paying tribute to the classic video company with a new flick titled "Electric Boogaloo: The Wild, Untold Story of Cannon Films" which has just been picked up by Drafthouse Films for distribution. Seriously, you should have seen my fat 6 year old ass trying to break dance. It would've made you throw up.

"Cabin In the Woods" is a new horror flick from Drew Goddard and Joss Whedon about a guy who goes to a cabin with some friends and then finds a bunch of weird awful crap. I know that makes no sense but that's what we've got for a plot description. Want to get even more confused? Check out the new poster for the film. It's got a cabin all messed up like a rubix cube or some crap. I don't even know why I'm telling you this. Seriously, I was so fat and I was trying to do a head spin.

America may have never have gotten over the whole Tom Cruise going crazy thing but no one can deny that's he's just so tiny and adorable you want to lock him in your closet and keep him for your own. Every morning you'd wake up and peek inside the closet to see little Tom Cruise sleeping on the tiny little bed he's chained to. At night you'd dress him up in doll clothing and put on elaborate dinner shows with him as the star. All the while knowing that you've got one of Hollywood's top leading men as your little tiny man doll. It would be a dream. Anyway, Tom's going to star in "All You Need Is Kill" as a solider who gets trapped in a time loop when he's killed. I think I've said too much.

Visiting Universal's Halloween Horror Nights on the West Coast and worried about finding your way around? Worry no more! Check out Universal's iPhone app for the fest. Ain't technology grand?

Joss Whedon's "Cabin in the Woods" gets bumped ALL the way to January 2010, and in the meantime will be "converted" into 3D. An interesting move considering we don't even fully know what the film's about yet. Thoughts?

Bored at work today? Got the day off? Check out The Jigsaw Game. Should be good for freaking out your co-workers.

If you're interested in Platinum Dunes' remake of "A Nightmare on Elm St.", visit their Twitter page for updates including behind the scenes set photos, beginning today.