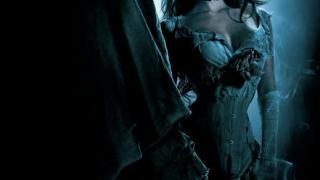 More pics from Rob Zombie's "Halloween 2". I only post them because the director's cut of "Halloween" is our topic for discussion next week on the podcast, so I have to subject myself to it this weekend. I'm currently devising ways to try and stop the pain while it's playing. Suggestions welcome.

First stills from the Woody Harrelson zombie comedy "Zombieland", or as I like to call it, "a probably fun film that will most assuredly be the official zombie jumping the shark moment when historians look back to this time".

Marcus Nispel officially has the job directing the "Conan" remake. This has Schnaars really broken up, he was really hoping Brett Ratner would get the job.

Some bloody "Piranha 3D" pics. I'm marginally excited for this. I would say "really excited", but let's not forget that "Mirrors" wasn't supposed to be the funniest film of last year. It's hard to tell what will happen when Aja actually tries to be funny... he is French after all.

Neil Marshall is reportedly in talks to direct the "Predators" sequel for Robert Rodriguez. Now if you'll excuse me, I have to go find my head because it just blew straight off my fucking shoulders.

Megan Fox in a Corset on the set of "Jonah Hex". Yes please.

David R. Ellis to bring us "Humpty Dumpty". The new film by the "Final Destination 2" and "FD: Deathtrip 3D" director is about: "a half-human, half alien creature who embarks on a murderous rampage after his alien mother is abused by two rednecks in the deep South." Oh, it will also be in 3D, so there's that.

Ving Rhames gets cast in "Piranha 3D", pretty much ensuring at some point a fish will get blasted with a shotgun. Good times.

Ridley Scott considering a return to the "Alien" franchise? I suppose the chances are slim that he'd get a sequel greenlit, but even if it's a remake I suppose the original director is the one you'd want on board.

Evan Rachel Wood joins "True Blood", I start to think perhaps there's a reason I should be watching this show. Hmmmm....

The rest of the episodes of "Harper's Island" will run on Saturdays at 9:00pm on CBS. They've all but given up on the show being a ratings success, but since the episodes were already produced they figured they should let it run out. Saturdays are typically filled with reruns for most networks anyways, so there's no real loss for them shifting to that night. Apparently the show was going to be canceled outright, but it was significant DVR ratings that saved it from the ax.

Ron Perlman says that if all goes well he'll be starring in Don Coscarelli's "Bubba Nosferatu" this fall. Perlman, of "Hellboy" fame, is replacing Bruce Campbell as "Elvis" from the first film. I love Perlman, but I'm not sure he's capable of filling either of those roles. We'll have to wait and see.

There's a new poster for this movie "Eve" that came out yesterday, but that's not the interesting news. People are (rightfully) remarking on the similarities between this and the comic book adaptation "Hack & Slash"... and by "similarities" I mean, it's the same exact plot. There's enough room in my heart for two sexy slasher hunters, but I'm not sure the rights holders to "Hack & Slash" are going to agree. We'll keep you updated on any legal shenanigans that may arise from this.

Thomas Dekker of "The Sarah Connor Chronicles" talks about a few upcoming horror projects he's starring in. This should really please all of the Google searchers who seem to end up on our site while searching for people who also hate this guy.

Will Arnett and Michael Shannon have joined the cast of the "Jonah Hex" adaptation. After finally making my way through "Arrested Development" on DVD, hearing Arnett's name in conjunction with any project pretty much turns me into a giddy school girl.

Say what you want about the Weinstein's, they're definitely shrewd business men. They're continuing that trend by buying all the French horror they can while at the Cannes film festival. The way things have gone lately with the horror coming from our froggy friends, I can't say I blame them.