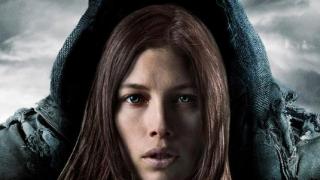 Get excited folks because there's a now video online with some hot behind the scenes action from the upcoming "Alien" prequel "Prometheus". Now get depressed because there's not one freakin alien to be seen in the clip. There is a lot of Ridley Scott though. So if you're into old guys this video will really do it for you. You should also check out "Cocoon". Tons of old guys in their bathing suits. I won't judge.

"Paranormal Activity 3" is headed to DVD on January 24th and today we've got a stockpile of features that are going to be included. I realize stockpile is not the right word but it sounds really cool so lets just go with it. Both the DVD and Blu-Ray will feature the theatrical and unrated versions of the film and the later will also give a gaggle of additional clips that didn't make it into the film. Alright that's not really much at all is it. This would be the worst stockpile ever imagined if it really was one.

I like Dennis Quaid but I have a tendency to mistake him for Jeff Bridges who I really like, mostly because he was in "The Big Lebowski" and that movie was awesome and I love it. I know I know I'm a hipster prick who references The Dude at least once a day. Well 'Eff you buddy I saw it in the theaters opening weekend so get off my back. Man you're such a jerk sometimes. Here's the trailer for "Beneath The Darkness", which stars Quaid as a local funeral home director with a dark secret. Wow it took us a while to get here didn't it?

And if you're into Jessica Biel, which I'm assuming everyone who isn't into old guys is, here's some new shots from her upcoming flick "The Tall Man". The film is about a small town haunted by the urban legend of a "Tall Man" who kidnaps children. So today we've had old guys, tall men and Jessica Biel. If my news didn't get you all hot and bothered there's a good chance you're already dead.

Would you like a sure sign that this new fangled 3D trend is going too far? Japanese studio Toei has announced that they are working on a 3D conversion for their classic "Battle Royale". No, not a remake; they're just planning on slapping some 3D effects onto the 10 year old film.

"Martyrs" director Pascal Laugier is bringing us his first US film entitled "The Tall Man", a woman in peril thriller in the vein of "Panic Room". He's bringing some star power with him as well as he has signed Jessica Biel as his leading lady.

Platinum Dunes making an original movie? Oh yes. Paramount, Platinum Dunes and Room 101 are teaming together to bring us a brand spanking new monster movie. Though there are no details of what kind of monster they plan on bringing to life, we are told that Mark L. Smith penned script is reminiscent of such films as "I am Legend", "Aliens" and "Descent".

Kurt Russell plan on scaring us once again as he signs on for the thriller "Undying", playing Virgial, a private investigator lured into a dark an surreal underworld by the mysterious Delia. With a script penned by Greg Whitta and directed by Jon Amiel, this could be a spooky little treat.