Stephen King's "The Stand" is probably the longest book I've ever read. I started and stopped 3 times and it took me over a year but I am proud to say that I read it and have forgotten most of it. I'm 95% sure I loved it though. The point here is there's a film version of the novel in the works and Scott Cooper of "Crazy Heart" fame has been picked up as the director. Ben Affleck was originally set to take on the job but now he's playing Batman and pissing off everyone on the internet so his hands are pretty full. Of money! Am I right? "The Town" was great.

"X-Files" creator Chris Carter has dropped word that he has a solid idea for a third film and is waiting on Twentieth Century Fox to give him the green light. The third film would go back to the mythology of the original series and the alien invasion date which has now come and past. I for one would like to go back and explore the mythology that David Duchovny is dreamy. I'm not sure I'm using that word right.

I had no idea that "The Wicker Tree" was actually a follow up to the original "The Wicker Man" but I guess if I read my own news or did any sort of research on what I'm actually typing I would have. Good news here though is original creator Robin Hardy is moving forward with "Wrath Of the Gods", the third and final film in the series. No real details about the movie are available yet but he hopes to start filing in 2014 and plans to have this one focus on the gods that the islanders worship, rather than the offerings being sacrificed for them. I can't even lie, half the time I just read the title of the article and assume I know what's going on in the news.

I could have sworn this was already news but "All the Boys Love Mandy Lane" will finally see it's way to VOD on September 6th and selected theaters on October 11th. Seriously this already happened right? I'm positive I've already made every stupid comment I'm thinking of so just go back and read those. I bet they were hilarious.

Wait did I know there was a "Poltergeist" remake in the works? I feel like I might have known that. I feel like I might have started a post with this same stupid joke before too. Rosemary Dewitt has been cast in the lead role of the 'hey you built your house on top of an indian burial ground' film so I'm assuming they're doing a remake. What a terrible joke this is to play on here if there really isn't one in the works.

I am a big ol fan of George A. Romero's "Dawn Of the Dead". A super big fan even. But at no point did I ever say, "Hey this needs to be shown in 3D". Despite that thought a 3D conversion is in the works and it look like there might be plans to put the film out in theaters again. No release date has been dropped but apparently the conversion is about a third of the way done so we will see how this all goes. I mean I thought "Nightbreed" only needed to be an hour and 15 minutes so maybe I'm all wrong about this conversion. I'm just a big dumb penis after all.

"Hustle & Flow" is one of the greatest movies ever made and Terrence Howard is one of the greatest actors or all time. There's no arguing that. Any jackass who knows his ass from his hand can figure this out. So now that he's been cast in M. Night Shyamalan new Fox series "Wayward Pines" I have fairly high hopes. The show will focus on a secret service agent who comes to a small town looking to find to missing agents. Stuff happens I guess, but nowhere do I read a description of a rapping pimp that he encounters so maybe my hopes aren't as high as I thought they were.

Never let it be said that I don't love an extended version of a film. Never! In fact I am rather smitten with the news that to celebrate the film's 40th anniversary the folks at StudioCanal will release "The Wicker Man: The Final Cut". To be released in the UK on DVD this coming October, and hopefully in the US shortly after, the classic film tells the story of a police officer sent to a remote island to investigate the disappearance of a young girl. Seriously, If there's one thing I say about movies it's "Hey could you tack on another 45 minutes to that gosh darn thing already? I'm trying to watch a movie here!". 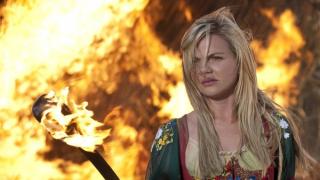 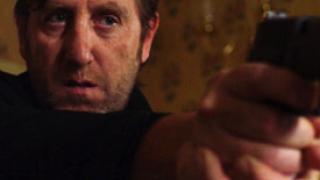 Eric Powell, creator of "The Goon" comic recently took to his blog to set the record straight on the current status of the big screen adaptation of the book. Despite rumblings around the net the movie is still very much going to happen and the production company behind it is currently looking for funding. I don't know if that means they're having bake sales or something but honestly that doesn't sound too good.

If you're as excited about ABC's "The River" as I am then you're honestly not that excited. It's on Tuesdays. I already have shows on Tuesdays. I'm not even sure I can work it into my schedule. The new website that just launched for it isn't really helping either. Sure it's all animated and crap and sure it's like a fun game but seriously, there's going to be DVR conflicts out the ying yang for this thing.

I love me some Linnea Quigley, I don't care what age. Alright that sounds kind of creepy but the news here is that the lipstick queen will be showing up in "1313: Cougar Cult". The film is set to go direct to DVD (shocker) on February 7th and revolves around a group of college guys who get a summer job working for three older women who actually turn into cougars. I think that's a pun, or a play on words, or a haiku.

I have no idea what these ramblings mean but Nicolas Cage wants to remake "The Wicker Man"... in Japan... and have "Ringu" director Hideo Nakata direct it... and have the main character be a ghost this time. No sarcastic comments here, folks. Someone needs to help this guy.