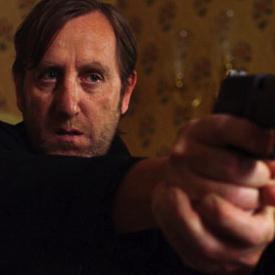 "Kill List" opens on a small dinner party. Jay and Gal, two average looking English blokes, eat a lovely meal prepared by Jay's wife. Gal has a new lady friend by his side. The friends laugh and, by all appearances, enjoy a happy night. Slowly but surely, marital tension begins to seep out of the glances between Jay and wife Shel. The creep of caustic remarks mixes with a healthy flow of alcohol before eventually erupting into a full-bore domestic incident. Gal, obviously familiar with this scene, acts quickly to settle his friends' young son, and to defuse the near-violent exchange.

Eventually, the proceedings settle down and the rest of the film proceeds apace, but by then, director Ben Wheatley has left viewers with a strong warning shot: things around here may get hairy. The more we learn about Jay and Gal, the more everything falls into place. The two grizzled, working-class type gents are in killers for hire. They've been off for a while, having recently completed a job that may or may not have gone well. Intentionally obscure and off-handed references to "Kiev" clue us in that this was not the type of thing that these hitmen would want to list on their resume.

The duo's boredom -- tinged with PTSD-esque trauma -- gives way to another job, one which neither of them is too keen to take. Details are slim; the client is shady. But out of need to do anything, they take the case.

What begins to unfold borders on the insane. Having clearly studied up on some of David Lynch's more commercial moments, Ben Wheatley walks his killers through several sequences of increasingly bizarre encounters. Jay, the more central character of the killing duo, manages to posses both the more sensitive demeanor as well as the more sadistic streak. He's the family man with a wounded psyche. As they dig into their assignment -- a 3 person hit-list -- these psychic wounds begin to openly bleed onto the screen.

When the killers discover that one of their targets has involvement with a grotesque child pornography ring, Jay goes off the deep end -- no wait, that's not strong enough -- Jay steps into an abyss of vindictive despair. He becomes a broken-down avenging angel who can very happily operate at the borders of humanity. In the realm of hired killing though, this type of behavior cannot stand, and Jay's behavior endangers not only their operation, but the pair's freedom and lives.

By the time they reach the third of their targets, "Kill List" has arrived at a uniquely dark place. Wheatley has so deftly and so slowly navigated the audience there that it almost comes as a surprise when the film takes on the tropes of several different horror sub-genres. The pacing and execution are so flawless that the dive into Jay's, and to a lesser extent, Gal's madnesses becomes the audiences' own dive into the darkness.

In many ways, "Kill List" embodies some uniquely British concerns and paranoias. The setting and language place the film very distinctly in the depressed economic areas outside the major metropolitan centers. But the central, existential questions that unravel as the film draws near its conclusion are the type familiar throughout horror. "Kill List" succeeds by finding that blend of human drama, tense action and quiet desperation that manage to haunt more than they scare. Like his influences, Lynch and even Robin Hardy's "Wicker Man", Wheatley understands that under-explaining the truly mysterious elements of our nightmares only serves to imbue them with more power to terrify.