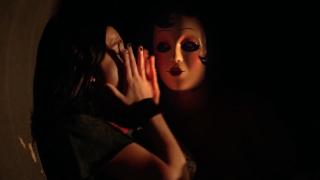 Get excited folks because the first three minutes of the next episode of "The Walking Dead" which comes to the boob tube on February 12th have hit the nets. I'm not going to watch it because I hate seeing the first few minutes of anything and not getting to watch the rest so please don't ruin it for me. Does someone get killed? Oh god don't tell me. Ok tell me. No don't!

Zach Galligan is pretty dreamy huh? Sometimes I just put on "Gremlins" and spend my afternoon day dreaming about what it would be like to have an apartment with him. I think I've said too much. Moving on. The movie "Nightbeats", in which he stars as a father trying to reconnect with his on a camping trip that gets ruined by Sasquatch, has finally been picked up for distribution by Wonderphil Productions. No word yet on when it'll see the light of day but I'm going to start looking for apartments anyway.

What would Bryan Bertino do if he was here right now? I'm sure he'd direct a film or two, cause that's what Bryan Bertino would do. When Bryan Bertino directed "The Strangers" we all though it was pretty cool. Now he's directing a found footage flick called "Mockingbird" about a couple who receive strict instructions on a video recording they must make or someone will die. Alright I lost it there, but we really had something for a couple lines didn't we?

Vampire love, it's what's for dinner. And it looks like Tom Hiddleston is stepping up for a big helping of it because he's joined the cast of Jim Jarmusch's "Only Lovers Left Alive". The cast already includes Michael Fassbender, Tilda Swinton and John Hurt and focuses on two vampires who have been in love for centuries. This sounds like the worst movie ever made.

I just waited through a 7 minute advertisement for some video game that gave me seizures to watch the new trailer for "Jurassic Shark". I regret nothing. The movie stars Emanuelle Carriere, who much to my surprise did not get her start in those late night Skinemax movies I watch, and is about a giant prehistoric shark that returns to bring death and destruction to a bunch of girls wearing next to nothing. I know, I'm excited too.

I know what you're thinking, why the hell isn't there a "Poltergeist" remake out there? I know you so well. Well good news kids because Roy Lee, the producer who brought you "The Strangers" and "Quarantine" says a reboot is very much a goal of his and hopes to have it out in the world sometime next year. I'm trying to track down his home address so you can go thank him personally. I'll let you know what I find, there's a lot of Lee's out there.

I refuse to explain to you the plot of "Silent Night Of the Living Dead" but I will tell you that both AJ Bowen and Tom Savini have joined the cast. I know it's tough love but come on, it's a play on the classic zombie flick and a Christmas song. What the hell don't you get? God do I have to wipe your ass too?

I'm not going to lie, I'm pretty excited about "Men In black 3". I don't know what it is but as my age gets up there I'm finding Will Smith more and more enjoyable. I'm just as surprised as you are! Anyway here's a look at the first poster for the film that is scheduled to hit theaters in May of 2012. Have you watched "Wild Wild West" lately? Seriously it's not that bad.

Bryan Bertino is the dapper young fella who wrote the lovable hit "The Strangers" and now it looks like Mr. Bertino is putting pen to paper for a new flick titled "Grim Night". The movie will take place on the one night every year when the Grim Reapers come to earth to collect souls. I wonder if they listen to Collective Soul while they do it. Boom du da du da du da du dat YEAH! Trust me, it sounds just like them.

I'm not going to bother explaining the premise of "Jurassic Shark". If you can't figure it out by the name then you might have some sort of learning disability. But I will let you enjoy a new poster for the flick along with a bunch of screen shots of women in small bikinis. See how I work? I insult and then I give. I bet it's giving you some sort of complex. You loser... I love you.

Here's a few new behind the scenes photos from the set of "Resident Evil: Retribution". Much to my surprise there are none of Milla Jovovich eating butterscotch pudding, offering children hard candies or taking her heart pills. I guess I don't know her as well as I thought I do.

A couple weeks back I was the lone person on the podcast who thought "The Darkest Hour" looked pretty cool. I'm sorry if I'm just more cultured then the rest of my neanderthal co-hosts. It must be upsetting for you the listener to have to hear clips of the show where I'm not talking. So here's a new poster from the alien invasion flick! And it's in Russian. Dasvidaniya mutha trucka. 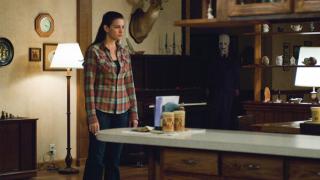 Jon and I do our best to describe the quality of "The Strangers".