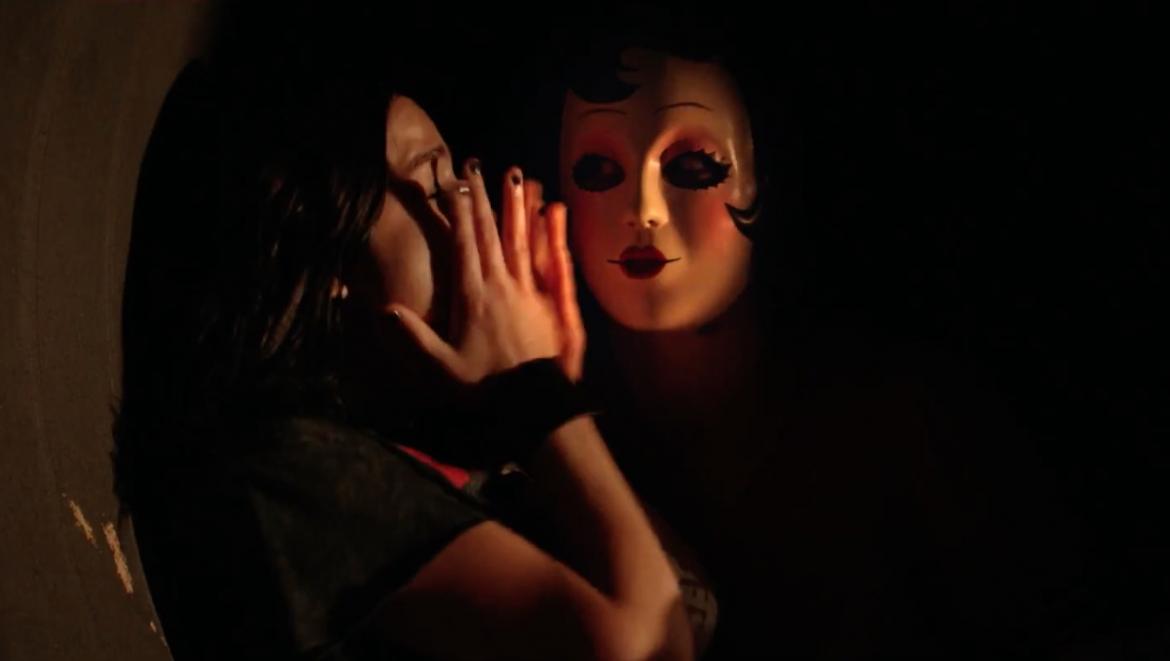 Horror filmmakers have a unique opportunity. Wtih several subgenres at their disposal they have the option to morph any franchise into a completely different experience. However, it can be tricky for a well-established series to step outside of its norm and explore a different area of horror. With risk can come great reward, though, and Johannes Roberts' sequel to 2008's The Strangers is a clear-cut deviation from the home invasion subgenre that introduced us to the three masked psychopaths. While The Strangers: Prey at Night still attempts to capture the unrelenting tension that made the original film standout, Roberts chooses to look back at 70's-era horror, and more specifically, the slasher genre, giving us an experience that starts out rocky but delivers enough grindhouse style to smooth over the rough spots.

Prey at Night begins right where we left off, with the roving killers—Dollface (Emma Bellomy), Pin-Up Girl (Lea Enslin), and Man in the Mask (Damian Mafai)—searching for a new home to terrorize. After invading an elderly couple's abode, it seems the three murderers are putting down their roots just in time for another group of unsuspecting victims to show up. Cindy (Christina Hendricks) and her husband Mike (Martin Henderson) have more on their plate than they can handle. Their rebellious daughter, Kinsey (Bailee Madison), has caused enough trouble that they have to spend every last dime to send her off to a boarding school. Before Kinsey can be sent away, Cindy plans a short weekend getaway with her family at her aunt and uncle's trailer park community. With their son Luke (Lewis Pullman) also in tow, the family makes their way to the seemingly vacant community, only to slowly realize the trio of killers is on the hunt.

Similarly to the first film, Prey at Night makes a few attempts to push the home invasion genre to sadistic heights. Unfortunately, Roberts tries to pack the overall tension found in the first film into the first two minutes, making the opening moments feel rushed and lacking any sense of tension. In fact, any time Roberts sidelines his characters to indoor hide-and-seek scenes the terror falls completely flat.

Thankfully, the ace up Prey at Night's sleeve is its clear love of the slasher genre. Throughout the film, there are shots and setups that seem deliberately lifted from slasher icons of the 70's, like The Texas Chainsaw Massacre and Black Christmas. Long tracking shots of open fields seem straight out of a Texas backroad, while the constant zoom-ins on character's terror ridden faces are delightfully retro. Sure, they're direct lifts from classic slasher films, but Roberts's use of visual space and expectations elevates the film to something different. As characters move outdoors to large, open areas, Prey at Night really finds its footing. A later scene in particular, which can be referred to as "the pool chase," takes the well-worn "killer hunts down wounded victim" trope and plays with framing. While a director with no vision would just choose quick, close-up cuts between the hunter and hunted, Roberts pulls back, creating a theater-like experience that gives us a chance to take in every corner of the frame, constantly searching for where the killer could emerge.

This same unexpected play on slasher tropes also steps into new territory in how the protagonists react to the situation. While the violence and brutality from The Strangers is still present, the heroes fight back. Thankfully, the killers rise to the occasion, bringing a relentlessness that builds the stakes throughout the film. In turn, we get two strong parties facing off against one another, where the spiritual and ghoul-like stamina of past icons, such as Freddy, Jason, and Michael, are running through the veins of the three masked killers.

With the modernization of the subgenre on full display by the third act, Roberts is able to step out of the trappings of the first act's boring setup. However, as fun as the whole ride is, there are still several moments that don't add up the way they should. While this could have been a genre-defining achievement, Prey at Night feels more like a solid but half-hearted attempt at playing with audience expectations and slasher tropes. Die-hard horror fans will likely find plenty to chew on, such as a final scene that's undeniably straight from Hooper's original Texas Chainsaw Massacre. As for newcomers to the genre, they might not feel the needed tension and fear until the stakes are almost at their peak.