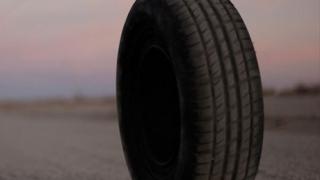 The finer points of murderous Goodyears...

"Rubber" has been kicking around for a while now and most recently it's gotten a dandy little TV spot. If you haven't heard about the film already all you need to know is that it's about a killer tire. Short and simple I know but I wanted to leave you enough time to ponder where the hell a TV spot for this movie would ever run.

Put it in the books kids, August 3rd, 2012 will be the day that the "Total Recall" reboot will hit theaters. Len Wiseman, who directed the "Underwold" flicks will take the lead and Mr. Colin Farrell will take the lead role. No word yet on who will be cast in the role of the 3 boobed hooker but god I can't wait to find out.

A gang load of new stills from "Paranormal Activity: Tokyo Night" have hit the tubes and from the looks of things this may not be just a bunch of security camera shots. So that might be good right? Maybe it'll be awesome! I don't know, I'm trying to stay positive people.

OMG you're not down at SXSW? Gee you totally missed this hot new alt rock grind math buzzcore band last night. I'm not even going to say the name because they're so underground you wouldn't know them. There's also a trailer for a new odd looking anthology flick titled "Little Deaths" that premiered down there. You can watch it but I bet you won't get it.

Corey Feldman seems to have hated "Lost Boys 2: The Tribe" as much as the rest of us. In a recent interview, the actor discusses why he thinks "Lost Boys 3: The Thirst" will actually be good. While my expectations still run rock bottom, his promises of seeing the Frog Brothers actually together at least sound fun.

"Rubber", a film about a pissed off psychic tire named Robert has been picked up by Magnet for distribution . If you've been dying to see a movie about a killer tire, you'll be set when the movie soon arrives on VOD channels across the country.

NPR correspondent Cory Turner recently took on a personal quest to track down the remains of the mechanical sharks used in the classic "Jaws". The three mechanical monsters were long believed to have been destroyed after shooting had ended for the film but much to Mr. Turner's surprise, The first set of posters for Lynch's upcoming horror flick "Hisss" have been released online. A movie about a snake woman's quest for revenge? You already know I'll be all over this one.

Yoshihiro Nishimura, the mastermind behind "Mutant Girls Squad" and "Vampire Girl vs. Frankenstein Girl", has begun production on his latest gore-soaked endeavor "Hell Driver". The plot: Japanese schoolgirls battle the undead in Tokyo. Life just got a little bit sweeter.

Speaking of quirky Japanese horror flicks, the trailer for "Neck", a film about a guy forced to watch a horror movie generated by his own mind, is ready for worldwide consumption. And people wonder why I spend so much time watching foreign horror movies.

Have you secretly wished for a horror flick featuring a killer tire? Me, too! Magnet Releasing has apparently acquired US distribution rights for "Rubber", a film about a murderous tire with telekinetic powers. This has been an awesome week for people with bizarre taste in cinema.