Hey are you watching "American Horror Story"?! No? Well I hate your stupid face! Sorry. I didn't mean that. But the FX show has been getting some decent buzz and now Mena Suvari and Kathleen Rose Perkins will both be guest starting on the show. Going to watch now? If you care about our relationship you will.

Teller, the one who doesn't talk in Penn & Teller, is creating a stage adaptation of William Peter Blatty's "The Exorcist" which will open in NY next year. The story will focus more on the questions of faith rather than the exoticism itself so it'll be a large change from the movie adaptation. There will also be no spoken parts. Should be interesting.... that last part is a lie.

Corey Feldman is in haunted Halloween attraction flick "Six Degrees of Hell" and I'm 99% sure I wouldn't be talking about it if he wasn't but here's a new trailer for the movie. Enjoy it. Or don't. I'm not the boss of you. And yes I know I've made the same joke before. Thanks for pointing out my flaws. 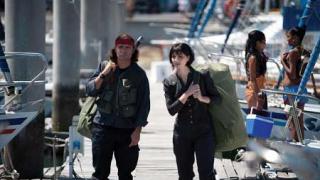 It's official kids, Rob Zombie's next film will be titled "The Lords of Salem". You want more info? The movie will apparently be about a group of 300 year old witches who wreak havoc on modern day Salem, Massachusetts. Maybe the witches will all have silly accents! Oh wait..

I think we may have talked about this months ago on the site but MTV has finally given David Harris' "Savage County" a release date. The drunk kids in the woods series will air on October 7th at 11PM on MTV2. Thank the cast of "The Jersey Shore" for putting away the condoms for a week in order for this to actually see the light of day.

And it wouldn't be a weekday without some new photos from "Saw 3D" coming online. Today we get to see Cary Elwes as Dr. Gordon and if you were at my house last night around 10:30 you would have seen me realize that's the same guy from the first one and blood shooting out of my temples from rage.

Well tickle my 9 year old self again because Corey Feldman recently dropped some good news that the original "The Lost Boys" will be screening at selected House of Blues locations around the country. Apparently the whole thing will be set up as a big event where fans can come dressed in costume and get a sneak peek of "Lost Boys: The Thirst". Get your greasy sax man outfit ready!

Corey Feldman seems to have hated "Lost Boys 2: The Tribe" as much as the rest of us. In a recent interview, the actor discusses why he thinks "Lost Boys 3: The Thirst" will actually be good. While my expectations still run rock bottom, his promises of seeing the Frog Brothers actually together at least sound fun.

"Rubber", a film about a pissed off psychic tire named Robert has been picked up by Magnet for distribution . If you've been dying to see a movie about a killer tire, you'll be set when the movie soon arrives on VOD channels across the country.

NPR correspondent Cory Turner recently took on a personal quest to track down the remains of the mechanical sharks used in the classic "Jaws". The three mechanical monsters were long believed to have been destroyed after shooting had ended for the film but much to Mr. Turner's surprise,

The trailer for Stan Helsing is now online. Packed with some high end humor parodying the likes of Freddy, Jason, Pinhead and Leatherface, this has highbrow written all over it! In actuality, it would appear that the only thing separating this from "Scary Movie 6" is a Wayans brother.

David Cronenberg to remake his own "The Fly" remake. Wait... what? Really? Sadly, yes.

"Reykjavik Whale Watching Massacre may be the next big foreign slasher film, but if they expect me to do anything but belly laugh when I read about it, they better change that damn name, and fast. Teaser trailer at the link.

Talk about obscure, Fango reports that there is a remake of the UK exploitation film "The House on Straw Hill" underway. The original is apparently still banned in the UK, and deals with a writer in an old house whose assistant turns violent and homicidal.

Mick Garris hopes to be shooting Stephen King's "Bag of Bones" this summer in Maine, however some haggling must first be done, since Maine doesn't offer the kind of incentives that other states do when it comes to filming there.

If you're curious to see how the "House on Sorority Row" remake is coming along (titled just "Sorority Row"), prints of the trailer are reported to be attached to Nic Cage's "Knowing", which hits theaters this weekend. Or you can just wait until Monday when it shows up online. Probably better for your health.

Looks like there's going to be a "Lost Boys III", and Corey Feldman will be producing. Shockingly, he will also be the "focus" of the film. Weird how that works out when you're the producer, huh?

Dan Harris, writer of "X-Men 2" and "Superman Returns" has been picked to write the film adaptation of EA's "Dante's Inferno" game which is currently in development.