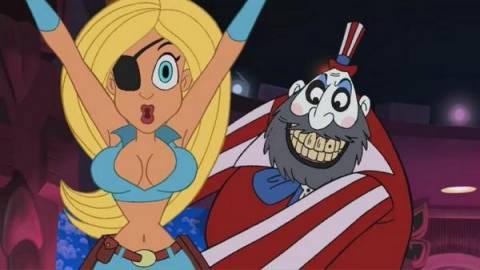 Over the past two years, Rob Zombie has been making waves in the movie world with his renditions of "Halloween" and "Halloween 2". One of his lesser known side projects has been his adventures in the world of comics. Just as is the case with his films, his comic book ventures have had both detractors and fans. One of the products to come out of this experiment of his is the character of El Superbeasto, the foul mouthed and over sexed luchadore hero. This eventually spun off for a grand vision of animated comedy which has oft been talked about on the internet and has finally found its way to video in the form of "The Haunted World of El Superbeasto".

The world of Monsterland is a bit off kilter from the world you and I know. Populated by various monsters, humans, robots and the like, the world is chaotic and lurid to say the least. El Superbeasto is a self described hero of the world, both as a wrestler and a crime fighter who works alongside his super sexy sidekick, and sister, Susie X. Being a man of such high stature, he is bound to have people who despise and loathe him and wish to enact any form of vengeance upon they can. Enter Doctor Satan. He's an evil lothario and a bit of a weakling, but he has a plan to remedy that. If he can find the marked woman to be his bride, he can gain the true strength of Satan. When his search for a bride just happens to give him the chance to end El Superbeasto as well, Doctor Satan's luck continues to look up.

If I'm forced to use one word to describe Zombie's "El Superbeasto", it would have to be ambitious. But, that doesn't fully cover it. What we have here is Rob Zombie's love affair with the crude humor and horror that he has flirted with so far in his film career brought to life. Yes, many of you may say that zombie has been doing nothing but making films to sing his love of these things for some time now but I can safely tell you that after a viewing of "El Superbeasto", those were merely hints of what is to come. With humor hinting toward the raunchy old Penthouse comics from back in the day, some will make you laugh, others will make you cringe and some will make you roll your eyes. Yes, it is over the top and completely self indulgent of Zombie, but that is not to say that it all falls flat. There is some humor here going on but seeing as this was largely made independently without a solid release in line, he was given free reign to make what he wants and the film meanders quite a bit as a result.

As for the horror side of things, keep in mind that none of the subject matter here is intended to scare you. That is not the motivation at all. It is simply the medium that Zombie has chosen to write in as that is what he knows and loves. Where you may have thought the man has gone overboard with his cameo references in the first "Halloween", his horror references here are completely over the top. With caricature versions of such characters as Jack Torrance from "The Shining" and any number of other visitations, they are numerous and groan inducing. However, they do fit into the setting of the film and work well. Where at first they felt annoying, they soon passed over the line to just plain silly and it became more of a fun game to pick out what references you can find in the background as the film wore on.

Surprisingly, for his love opus to sex and blood, Zombie managed to piece together a rather impressive voice cast. Featuring the likes of Paul Giamatti as the lead villain Doctor Satan or Tom Papa as El Superbeasto himself, he's managed to lure in some top notch voice talent. Giamatti performs as one would expect him to act as does Papa. Both are easy to forget who you are actually listening to throughout as they lose themselves in the work.

Other well known actors show up as well and add to the fun game of 'find the reference'. If you pay close attention, you will hear the likes of comedian Brian Poesehn, horror veterans Bill Mosely and Ken Foree, and even Sponge Bob himself, Tom Kenny. Now, it wouldn't be a Rob Zombie without the appearance of Mrs. Zombie herself, Sherri Moon. She's here and once again, she's prominent. However... she actually works fairly well as a voice actor and I dare say fits in better than she does as a physical actor. She is suited to the role, manages to be funny and overall becomes Susie X. Which is more than could be said for some of the other actors that show up in cameo roles.

"The Haunted World of El Superbeasto" is an acquired taste. It is extremely over the top, quite lurid and very gratuitous. But, there is a plot here and it is executed and complete if a bit rambling. This movie will be an acquired taste for many. I can tell you this; if you are not a Rob Zombie fan before seeing this film, this will not change your mind. Fans of the man will be fairly pleased and entertained. Just keep in mind, it may not be for everybody.

Aimy in a Cage