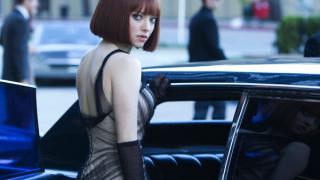 In news that I don't know is good or bad it looks like Bradley Cooper has decided to back away from the lead role in "The Crow" remake because of scheduling conflicts. Rumor has it that Mark Wahlberg and Channing Tatum are both being tossed around as replacements. In other news I have recently discovered that Channing is apparently a name for a man. I think at least.

Fall is right around the corner my friends. I know because I've already gotten my candy corn scented candles from Yankee Candle. But aside from that exciting news it also looks like Universal Studios Halloween Horror Nights is shaping up. It looks like this year's terror tram will take you into the world of Wes Craven's "Scream" specifically focusing on that last installment of the franchise. Just spit balling here but I think they should plant teenagers on the ride that use confusing lingo to make you feel old. It'll really bring the whole theme home.

Everyone loves Ed Harris. It's a fact, I took a poll on Facebook. And it looks like his new haunted submarine flick "Phantom" has gotten some funding and distribution support from the good people at RCR Media Group. Man the kids love them some RCR don't they? Harris plays the captain of a haunted submarine who has to make a decision that could either destroy his homeland or launch world war 3. What the hell could that choice possibly be?

A new poster for the Amanda Seyfried and Justin Timberlake flick "In Time" has hit the web and I can honestly say this is the first time I've ever had a crush on a poster. I'm not saying if it's because of one or both of them I'm just saying I got all kinds of tingles in my belly. If you're not familiar with the film it takes place in a world where a person's time left on this planet is the new form of currency. Timberlake plays a future world Robin Hood who gives away time to the poor. I bet he does it in a super sexy way too. I think I've said enough.

"Shark Night 3D" is like "Piranha 3D" only it's rated PG-13 so it's going to be missing all of the good stuff, AKA blood and boobs. Nonetheless it hits theaters on September 2nd and a new TV spot has hit with all kinds of shark biting action... So it's got some good things going for it. Like kids can get in to see it without a parent or guardian. So that's a plus for the moms out there. Maybe drop the kids off at the theater and go treat yourself with a mani-pedi and a carton of Virgina Slims.

If you left your AC filled home this weekend to see "Cowboys & Aliens" then you probably saw the trailer for Andrew Niccol's new Sci-Fi flick "In Time". For those of you who didn't though you're in luck because it's on the intertubes also! Justin Timberlake and Amanda Seyfried star in the film which takes place in a future where a person's time left on this earth has replaced our legal tender. I'm guessing from the cast list it's also a future where all ugly people have been done away with also. I can't wait for this future.

If you've been waiting for "A Serbian Film" to hit Blu-Ray and DVD so you can own the sickest film I've ever had the misfortune of watching then you're in luck, and you should be imprisoned. For those of you not familiar with the film it is focused on Serbia's greatest porn star who comes out of retirement for one last hoorah only to find he's become a part of some sort of sick and twisted extreme form of gonzo film making. October 25th is the date that you can pick it up and I assume also be added to some sort of government watch list. Happy Halloween you freakin deviants.

If you're like me then you spend most of your time sitting on the couch watching these crap movies eating cheese curls all weekend. Mother of god I love cheese curls. But it might be time to put them down and get some exercise because a new 5K race called Run For Your Lives is coming and it looks pretty kick ass. Participants will test their endurance on a 5K run that's chock full of obstacles and teaming with zombies. Not real ones I assume, that would be pretty dangerous, but still it sounds kind of frightening.