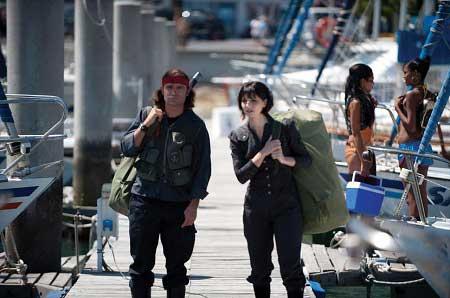 It's been a long strange trip my friends. The original "The Lost Boys" film that was released all the way back in 1987 is pretty much a classic to not just horror fans but to anyone who was smart enough to see the film. Over the next twenty years we saw the rise and fall of the two Coreys, the greasy sax man work his way into pop culture and a much debated sequel titled "Lost Boys: The Tribe". The film did nothing to capture the joy we all felt when we saw the original but it did well enough that in 2010 we now have "Lost Boys: The Thirst". Good or bad "The Lost Boys" films are here my friends so you better get used to it.

"Lost Boys: The Thirst" focuses on Edgar Frog, played once again by Corey Feldman, and his never ending struggle to rid the world of vampires. We open with Edgar along with his brother Alan battling a horde of bloodsuckers in our nation's capital. Unfortunately the Frog Brothers days of vampire hunting come to an abrupt end when Alan is forced to drink the blood of a vampire and is immediately turning into the same beast he's been hunting all these years. Cut back to California and Edgar is just about to be evicted from his home and is trapped for cash when Gwen Lieber, a well known author of a series of vampire romance novels comes knocking. Think the "Twilight" author if she was a former stripper. She offers Edgar a boat load of money to help her find her brother who has apparently been kidnapped by a tribe of vampires who host raves in order to get kids to drink their new beverage they call "thirst". Unfortunately for the kids though the drug is actually vampire blood. Edgar reluctantly accepts her offer in the hopes of finally eliminating the vampire race for good.

You can probably figure out the rest from here. Edgar teams up with a ragtag group of vampire hunters to fight evil. Some die, some make it and Corey Feldman delivers a lot, and I mean a lot, of one liners in the same "bad ass" voice he used in the original film over 20 years ago. A decent amount of clips from the original are thrown in to tug on our heart strings to remind us that Corey Haim passed away less than a year ago and truth be told it worked. At least on a big old softy like me anyway.

Sound awful? It isn't actually, well not completely at least. The film is actually pretty well shot. Now I don't mean it's going to blow your doors off but for a direct to DVD movie the gore and video quality are pretty impressive. Somewhere a long the way our vampires morphed from the two fanged blood suckers we're all used to into a a band shark toothed monsters but at the end of the day who cares. If you're going into this thinking you're going to get a masterpiece than you've got a lot more problems then I can solve in a movie review. And in case you were wondering, yes there's a cover of "Cry Little Sister" in the movie.

That's not to say the movie is all gum drops and rainbows. There's some serious flaws here. Most notably the fact that the entire plot is centered around a rave party. I have no idea if raves still exist and God help me I hope they don't, but at this point the idea has been beat into the ground. There's been more horror films centered around the idea of a bunch of kids piling into an abandoned warehouse, screwing like rabbits and taking god knows what kinds of drugs. Some better than this one and some much much worse, see "Return of the Living Dead: Rave to the Grave" for a good example.

Seeing Corey Feldman reprise this role, as much of it pains me to say, is getting pretty old too. He's pretty much doing an impersonation of the role he played back in 87 but his age is starting to show. This is only overshadowed by Jamison Newlander who plays Alan Frog, just as he did in the original. But all this is pretty easy to get past as the rest of the cast does a pretty decent job in the movie.

At the end of the day "Lost Boys: The Tribe" is exactly what you'd expect. You're not going to relive your teen years with this one but if you think long and hard about it you probably shouldn't want that anyway. What you can do is enjoy a decent vampire flick that isn't to serious and will most likely have seventeen more sequels attached to it. Either way you're going to have to get used to Corey Feldman again.