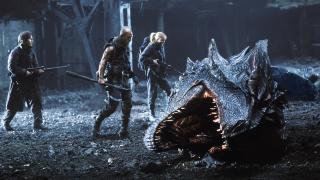 Ever since season 2 of "The Walking Dead" picked back up I've been giddy with excitement over all the happenings with our band of zombie killers. And with news today that British actor David Morrissey will be joining the cast in season 3 as "The Governor", the leader of a group of survivors that the run into Rick and the gang, well I'm just skipping around. Alright honestly I don't even know who this guy but this is the best you're going to get today. Don't forget to tip your waiter.

Christian Bale has been confirmed to be taking the lead role in a new revenge flick from "Crazy Heart" director Scott Cooper titled "Out of the Furnace". The film is set in 1986 Indiana and Bale will play a former prisoner who finds out his brother has been murdered while he was locked up. I smell prison shower scene! Not literally, I don't know what that would actually smell like. Awful I bet.

I've lost track of what's actually going on with the "Robocop" remake but it looks like "The Killing" star Joel Kinnaman has received an offer from MGM to take on the lead role of Alex Murphy, the cop turned robot.. or Robocop as you might call him. Seriously, didn't Colin Farrell already take the role? What the hell is going on here. Where am I!?

I didn't want to talk about this because I feel like there's a new casting update every day for some new horror show but here goes. Dave Annable has joined the cast of "666 Park Avenue." Please update your score cards.

Some new behind the scenes photos for "Battle: Los Angeles" have hit the net and they're full of alien goodness. I haven't seen the movie yet but if all the aliens want is one city then maybe we should just let them have it. The place has lost all its appeal since 2Pac died anyway. Or did he!?

According to director Matt Reeves the story for "Cloverfield 2" hasn't even been discussed and the film may never happen. I know I had trouble getting out of bed today too just knowing this! Let me help though, annoying guy runs around with camera while his friends jump around some the city avoiding giant aliens. Let's light this candle!

The newest name to be tossed around Ron Howard and Stephen King's "The Dark Tower" film is Christian Bale. Of course he's being rumored as their first choice so take that for what it is. My first choice for my bus driver tomorrow is Jackie Gleason but he's been dead for 20 years so it's probably not going to happen.

Director David O. Russell recently dropped knowledge on why he decided to drop out as director of the upcoming big screen version of "Pride and Prejudice and Zombies". Apparently the studio only wanted to put about 25 million into the budget and Russell was hoping for almost double that. When you think about the fact that they spent 75 million to make "Monkeybone" you start to think David might have a point. 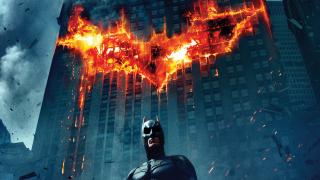 We try to control our collective nerdgasms over "The Dark Knight", and frankly we didn't do so well.