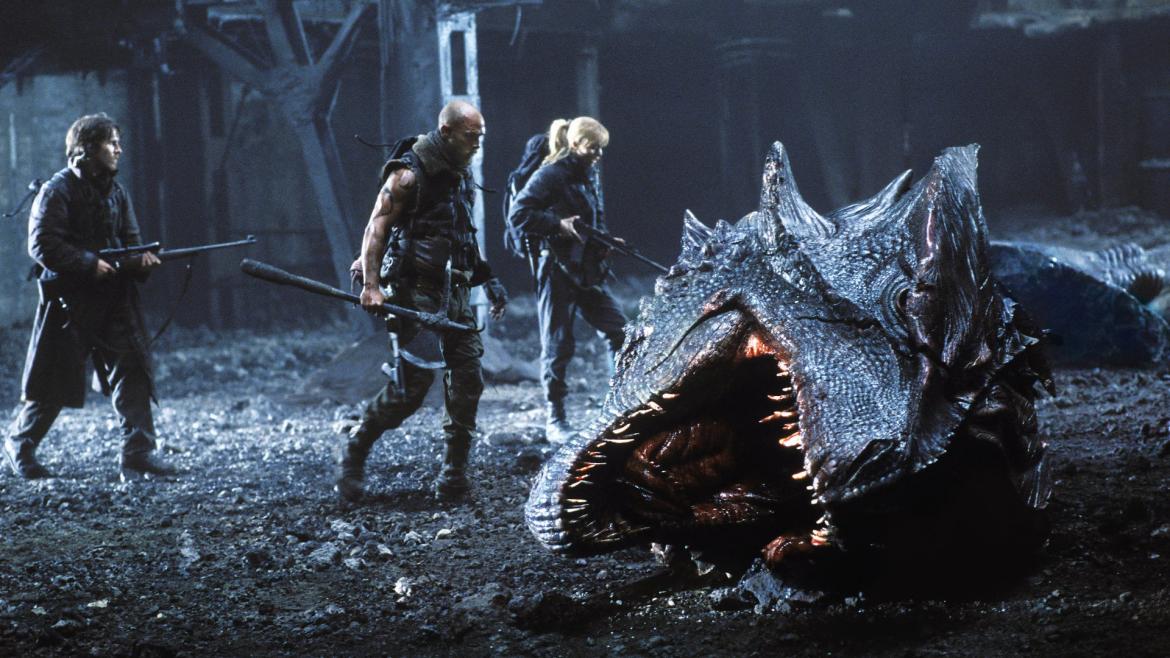 Rewind to 2002 where to-be Oscar winner Christian Bale and Gerard Butler were fairly unknown to mainstream audiences and were starring alongside to-be Oscar winner Matthew McConaughey in Reign of Fire, a post-apocalyptic flick set in 2020 where dragons are awakened and burned the world into ash. Fast forward to 2019 where that pitch with the now Oscar-winning Bale and McConaughey and go-to action star Butler would be greenlit instantly with quite possibly one of the largest budgets you ever saw. We can imagine what updated effects would do for this now (probably directed by Roland Emmerich), but the 2002 version benefits from being a product of its time as an early 2000's gritty action adventure with gruff performances from its two leads.

The film opens in mid to late 2000's London where underground construction discovers the long covered lair of a dormant dragon that escapes, quickly multiplies, and lays waste to the world. We pick back up in 2020 where a pocket of survivors maintain a community hidden away in a castle as they struggle to survive with resources running low. Along comes a group of American soldiers who have traced the source of the dragon outbreak to London with the intention of killing the lone male, thus ending the creature's ability to reproduce and ending their reign once and for all.

Reign of Fire asks quite a bit from its audience, but if you can get past the initial silliness of dragons in the modern world, the post-apocalyptic setting makes for some gritty and chilling imagery thanks in large part to the monotone color scheme. The washed out landscapes resemble the humble drabs of Game of Thrones' Winterfell. To Rob Bowman's credit he plays the film completely straight, employing a brand of tough guy cinema that is never more evident then when Matthew McConaughey shows his dirty bald head about 30-minutes in. His typical southern charm replaced by a cocky masculinity and guttural pronouncements. Bale's Quinn and McConaughey's Van Zan butt heads right off the bat, making for a tense and shaky peace agreement while Van Zan's Kentucky Irregulars (that's what they call themselves) make their way to London taking down any dragon they can in the process.

The arrival of the Kentucky Irregulars brings upon one of Reign of Fire's shortest but most thrilling scene in which sky jumpers leap out of a helicopter as bait for the dragons. Once in the air, the divers are cutting through clouds with zero visibility hoping to get a glimpse of the dragon on their tail to unleash netting with the hope of getting them to the ground. The entire scene lasts barely 20 seconds, but the sound design and POV shots make for visceral cinema. The shame being that the film never really matches the same pitch in terms of action. Bowman rarely takes advantage of his fiery premise as the dragons are few and far between.

In spite of the lack of dragon moneyshots there's plenty of tough guy posturing to satisfy lovers of 90's action without all the cheesy one-liners. Reign of Fire takes a splendidly metal title and premise, but fails to really strike that euphoric blockbuster chord. Still, there's a spark in the performances that keeps the film's embers burning even if Bowman's direction never quite fulfills the eye candy spectacle many were likely hoping for.