Joe Bob Briggs is a syndicated columnist most well known by horror fans by his show from the late 80's and 90's on TNT called "Monstervision," where he hosted late night B horror. In a lot of ways he was the last great B movie host. This interview was done around 2003.

Emily starred alongside Catherine Elizabeth in the Canadian horror film "Ginger Snaps." This interview came out around the time that the first sequel, "Ginger Snaps II: Unleashed" was released to video in the states. 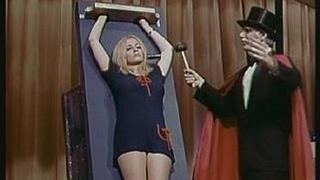 We spoke to Jeremy circa 2004, a few years after his straight to DVD project "The Attic Expeditions" was released. His new film "The Wizard of Gore," which he mentions briefly during our interview is now making it's rounds on the festival circuit.

Ellie Cornell lights up the screen in 1988's "Halloween 4," and met an untimely demise in the following year's "Halloween 5." Right before we caught up with her she was gearing up for her acting come back in "House of the Dead." That didn't turn out too well for her (or Uwe Boll for that matter) but we still love her to death. Read on to find out what she had to say.

Linnea Quigley is considered by many to be the ultimate Scream Queen from the 1980's. We chatted her up in 2004 to see what she was up to, and talk about her appearance in that year's indie flick "Corpses Are Forever."

Felissa is most well known for her role as a confused young murderess in Robert Hiltzik's low budget stalk and slash tale "Sleepaway Camp," and we caught up with her in 2003 right before the DVD release of Dante Tomselli's "Horror," a film in which she had a cameo. She would also go on to star in his next film "Satan's Playground."

We caught up to Ellen Sandweiss in 2003, right after she was cast in Dante Tomaselli's "Satan's Playground," which was released straight to video in 2005. She's most well known for getting acquainted with a tree in Sam Raimi's cult classic "The Evil Dead."