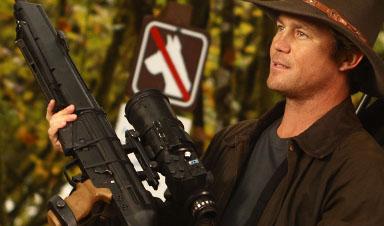 What would be the most traumatic way to watch your father die? Frail and cancer ridden in a dingy nursing home? Shot by Crips initiating a new member in a “wrong-place / wrong-time” convenience store robbery? Decapitated by Islamic fundamentalist terrorists in a video posted on YouTube? As bad as all those things are—and they are all bad—the movie “Loch Ness Terror” thinks that the worst way would be to see dad chomped to death by an angry Loch Ness Monster whilst trying to steal her eggs. And while many would say that’s what dad gets for trying to steal the eggs of a rare aquatic prehistoric creature, this is lost on young James Murphy, who grows up to be a freelance cryptozoologist that dresses like Roland from Stephen King’s “The Gunslinger”, right down to the ground-length leather duster. James, played ironically enough by Brian Krause who’s only other notable thing was “Stephen King’s Sleepwalkers”, dedicates his entire life to hunting down the monster, who has turned up in, of all places, a small town on Lake Superior (presumably the Canadian side, for budgetary purposes). How did a Loch Ness Monster get all the way from Scotland to Canada? Why, underground tunnels, of course! (Pure. Fucking. Genius!) The local law enforcement, per usual, believe that all the body parts, headless corpses and decaying beached sea-creatures are the work of a large animal like a bear, constantly ignoring James when he’s trying to tell them that it’s ol’ Nessie. Luckily, one kid who runs a lake tours business believes him and together they track down the monster using the latest in simulated PowerPoint-style computer graphics superimposed on a monitor. But badly rendered sonar isn’t gonna bring the beast down, so they are also armed to the gills with mega-machine guns filled with cyanide-tipped bullets and lung-frying microwave-emitting EMP blasters. If that isn’t the ultimate fuck you to dinosaurs, I don’t know what is. Eventually, the police (the sheriff is the boat-renting kid’s mom, so that helps) decide that maybe James isn’t full of plesiosaur shit, so they team up with him and the kid to rescue a group of spoiled rich kids (including a foreign exchange student who starts every sentence with “How you say?”) off an island which, awesomely enough, is inhabited by lots o’ baby Nessies, all hungry and all wanting to feast on humans. Cue EMP blasters! Much like a cuddly little baby sea monster, it is impossible to not want to hold and squeeze and gently kiss “Loch Ness Terror” on its slimy little forehead. It is fun (of course) and well paced, wasting no time in getting to the head-squishing action. As a matter of fact, for a Sci-Fi Channel movie, this is surprisingly gory, with human guts and exploding Nessie heads abound. The monsters themselves are a mixture of CGI and, adorably enough, little nipping hand-puppets that deserve their own kids show. Even Brian Krause, who I forgot to mention was also a regular on “Charmed” (a show I never watched but have masturbated to numerous times), is, for such a supposedly dark and brooding character in a face-obscuring hat and long brown leather coat, a cheerful, happy-go-lucky cryptozoologist that, thankfully, never lets his traumatic childhood get him down. No pussy psychiatric counseling for this anti-hero! Once again, Sci-Fi delivers the goods, with “Loch Ness Terror” providing solid entertainment in a way that even the biggest blockbusters can’t deliver. At the very least, my dad, who died at the hands of an enraged Sasquatch, would have loved it, I’m sure.