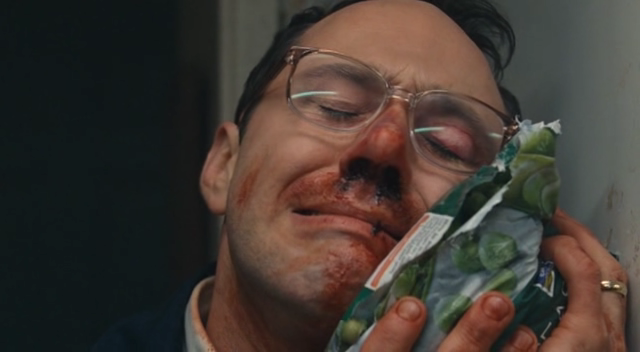 David has a dream, a dream of owning a boat. His brother Steven has a dream too, of owning their mother’s house. Neither have the money to buy what they want, but David has a plan; kidnap the daughter of a local small time crime boss and hold her for ransom! If Steven helps, David will sign off his share of mom’s house. If David succeeds, he’s got the money to buy his boat; everybody wins! Unfortunately for the both of them, they’ve never attempted a kidnapping before and it’s not long before they find themselves holed up in a country side cabin with a strong willed pissed off blonde, and something even more sinister stalking them across the countryside.

“The Cottage” combines two well known film elements together for a nicely wrapped product; the British crime extravaganza, and your common slasher flick. Not a common joining by any means, but they play well together as both genres are brought to the forefront. You’ll laugh heartily at these two bungling brothers and their incompetent antics, and you’ll jump at just the right moments as the movie slowly transforms into a stereotypical slasher flick at the midway point. Well written, the plot flows well and leaves no glaring holes, so overall you feel fulfilled by the entertainment quotient contained within.

Where the problem arises is in the two separate genre elements; both are well implemented, but neither is innovative. With this pairing one would hope to see something new brought forth by the mating of these two beasts but unfortunately, they’re not. For the crime spree side, you get your standard laughs and chuckles at the convoluted plot, the down hominess of the criminals involved, the sympathy towards Andy Serkis and his want to sail the world. It’s all-standard though; we’ve seen these elements before and by now, they’re slightly stale. On the slasher side it’s much the same; there are some good jumps here, some good kills, but again we’ve seen it all before.

That’s not to say that “The Cottage” is completely bunk though. It just fails to be mind blowing or ‘new’ enough to get the tongues wagging at the water cooler the next day. Andy Serkis does a superb job as usual in his role of David. He’ll make you laugh; he’ll make you wistful in pursuit of his dream. Simon Schatzburger as his brother Steven will make you crack a smile a time or two with his good boy out of water portrayal is spot on and believable. For the underused portion of our show, we also get a short cameo by Pinhead himself Doug Bradley as village local who warns of the chaos to come. We’d love to see more of him as what he had was great, it was only about sixty seconds of screen time all told.

“The Cottage” is another in the line of super short theatrical release/quick dvd release trend that we’ve been seeing as of late. There’s a lot of buzz surrounding it that is warranted, just be wary that the hype train doesn’t set your sights too high. It’s a solid movie all around; however it falls short of some of the praise it’s gotten around the internet as of late. Keep your expectations in check and you’ll have no problem.