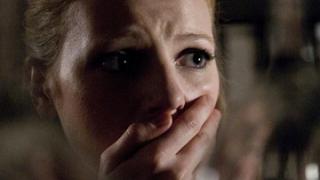 Poor Tony Todd, he's been needing work lately what with all his TV appearances and movies and such. Thankfully, he's going to be adding another film to his resume when he returns to the "Final Destination" franchise for the fifth installment.

Paramount has decided they need some original horror projects in their stable as they prepare the new property "School of Horrors". With the writer/director team of George Kay and Jim Field Smith already tapped, the movie is described as "Home Alone" in Hogwarts with it's plot of a young boy left in a haunted school by his parents.

Namco's busy preparing for the release of the old school re-do "Splatterhouse" and this trailer and game play clip promises that the game is going to be a bloody good time.

There's a new still from "Paranormal Activity 2" floating around out there that gives us a taste of... not much.

I woke up this morning thinking, "I sure would love to see a movie about a bunch of Nazi's in a giant take fighting a giant demon". Good thing there's movie in the works called "Panzer 88" about nazi unit in a King Tiger (Read: Big Ass Tank) running into a demonic force on the frozen Russian border!

The next "Final Destination" installment has been given an annoying official title in the form of "5nal Destination". Details have slipped about the film's opening suspension bridge disaster as well, but we all stopped caring after "5nal".

Anne Rice herself has taken to talking up speculation about her own properties as she drops hints about a possible "Vampire Lestat" reboot as well as a possible "Witching Hour" film or TV series. There are little to no concrete details thus far but 'Twihards', pay attention; this is where your whole goth romance schtick got its start.