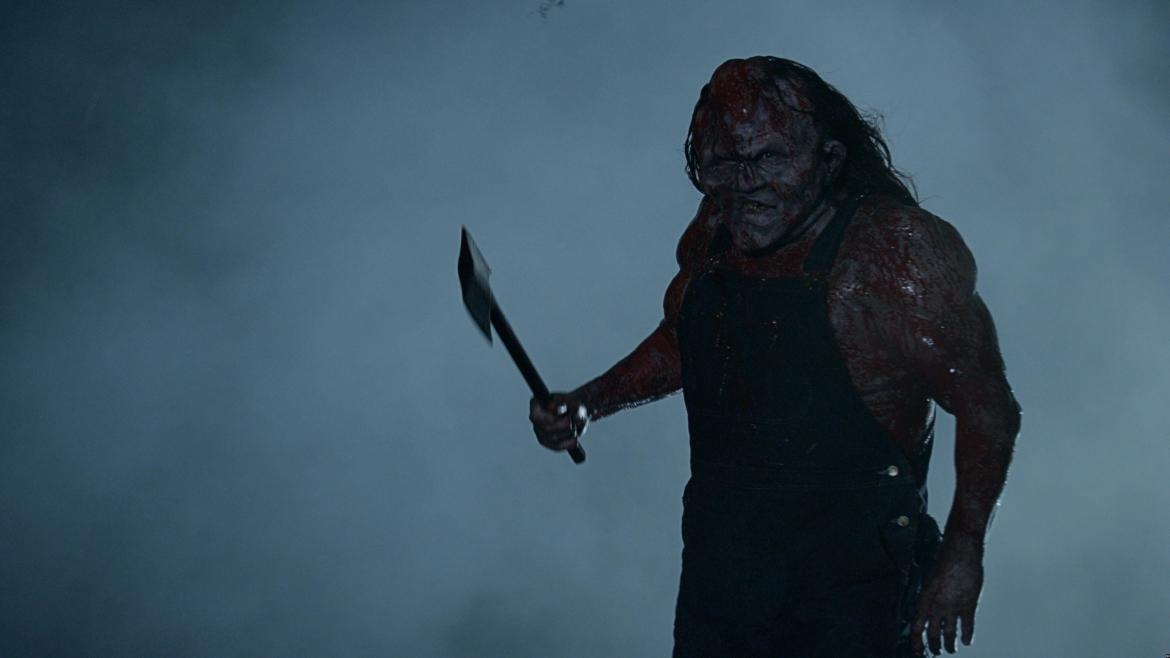 I'm not sure anyone could have predicted that we'd ever see a second, let alone third Hatchet movie. Yet here we with a fourth installment, Victor Crowley, doing essentially the same thing he's been doing all along--ripping off arms, stomping skulls and violently chopping up bodies with his iconic hatchet. The wheel is the same as it ever was and yet somehow the ride and all its squishy blood spewing props have never looked better.

Andrew (Perry Shen) is the sole survivor of the bloody rampage (the events of the first film) of Victor Crowley 10 years prior. He's got a new book chronicling the events and an angry following of people who believe that he was responsible for murdering everyone despite being acquitted of the crime. Andrew begrudgingly agrees to return to the site of the murders for an interview with the promise of a massive payday when the plane carrying him and a small TV crew crashes into the swap. To make matters worse, a group of filmmakers filming a mock trailer in hope of financing their own Victor Crowley movie mistakenly resurrect the disfigured killer and Andrew finds himself reliving his worst nightmare.

Victor Crowley is a direct sequel that also feels like a reboot. There isn't a whole lot here that we haven't already seen, but Green's sense of humor and jovial tone around all the bloodletting feels much more genuine this time around. Essentially, this entry works in a lot of the same way the latest Chucky movies (Curse of Chucky and Cult of Chucky) worked. A filmmaker taking back control--behind the camera--of the franchise that he started and just having fun with it. Green has written every entry, but unlike the previous sequel this one particular felt like his heart was truly in it.

Visually the film isn't exactly pretty to look at, but Green's throwback slasher has always been less about a crisp clean picture and more about the lumbering killer eviscerating his prey, and eviscerate he does. As previously mentioned, Green is not reinventing the wheel here nor is he looking to deliver some out-of-left-field twist that somehow rewrites the Victor Crowley mythology. Blood geysers out of every orifice, heads explode into mounds of jelly--in one of the more inspired/comedic kills Crowley rips off the victim's arm with the hand holding a cell phone, shoves it up one end of the victim and out the other while still holding the phone. It's this kind of gleeful absurd violence that makes the Hatchet franchise a guilty pleasure for some and Victor Crowley plays out almost like a greatest hits album.

Adam Green has dabbled in serious genre affairs to great acclaim, but rabid fans clamor feverishly for the relentless gorefests that only Crowley can satiate. Victor Crowley is a welcome return to a cheesy fan favorite that's a distinct step up from the sequels and perhaps, for some, it even eclipses the original.

Day of the Dead: Bloodline