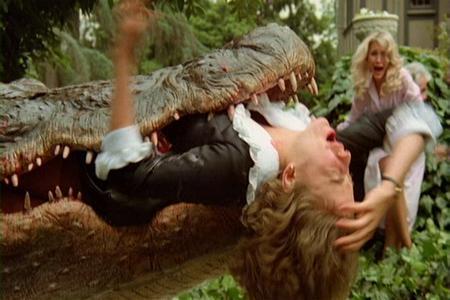 If a grouchy father flushes a baby alligator down the toilet in Chicago will the residents of Tarzana, California pay the price for it 15 years later? This is not the question posed by Lewis Teague’s 1980 creature feature “Alligator” but it is one that will float into the mind of most viewers. Other reasonable viewer inquiries may center on the crocodilian capacity for vengeance and whether or not John Sayles missed his true calling as a monster movie scribe.

During a vacation in the everglades a young reptile enthusiast and her family watch an alligator wrestler get his leg mangled. Naturally, they are inspired to pick-up a pet gator for their Chicago apartment. Once back at home Dad throws a hissy and flushes little ‘Ramon’ down the commode.

Many years later, body parts start surfacing in the local wet wells around Chicago. Detective David Madison, a guilt-laden bachelor who lost his partner on duty several years earlier is assigned to the investigation. Madison and a green beat cop named Kelly head to the wastewater tunnels to search for answers. Upon arriving they find that little Ramon has grown up and before they can get off a single handbag joke Ramon eats Kelly while Madison watches helplessly. The detective’s coworkers scoff at his giant alligator tale, and his rock-gargling chief is none too receptive either. Madison enlists a comely, young herpetologist named Marisa Kendall and gradually they connect a rash of dog snatchings, the disappearance of a pet store owner and Slade labs, a high profile genetic testing facility, to the over-sized septic meat clamp.

Several attempts are made to flush the beast out of the poop pipes and eventually Ramon abandons his subterranean digs for the local swimming pools and urban lakes. After a run in with an unscrupulous doctor, Madison is judged a nuisance to Slade Labs and the mayor brings in a big game hunter named Brock to solve the city’s reptile problem. Brock gets croc’ed, Ramon eats a kid dressed as a pirate and Madison and Marisa decide to take matters into their own hands.

“Alligator” is the movie that The Asylum studio has been trying to make/remake for the entirety of its existence. And while I might list something like “Mega Shark vs. Giant Octopus” as the best MST3K film never to be featured on that show, Alligator is on a whole different plain of guilty pleasure from anything that Asylum has to offer. One of the big reasons for this is John Sayles’ script.

Sayles, who was the directorial darling of independent cinema well before the studio feeding tubes were attached to that sector, wrote a well paced, funny, tongue-in-cheek script for ‘Alligator’. The Madison and Marisa characters have dimension but never so much that their place in a film about a giant gator is drawn into question. There is just the right amount of jokes and the funniest ones have nothing to do with Ramon. In fact, some of them feel like they were written after casting because they make light of the physical features of the actors. It is true that once the principles are in place the viewer can smell the fumes of a ‘Jaws’-ish endpoint a half hour away. However, because of the good casting and the punchy script the end seems less important than the means. Источник: https://kinosalo.org .

In one way “Alligator” is like a better version of “Troll 2”. This is because much like the Claudio Fragasso classic the more things you find fault with the more apt you are to like it. For instance, though most of the action is set on the mean streets of Chicago there is virtually nothing geographical in this film that gives any feeling of the old ‘Hog Butcher’. On the contrary aerial shots and wides are filled with the palm trees and backyard pools that define the San Fernando Valley landscape. Even more lovable is the fluctuation between the eerie sewer lighting and the Quinn Martin flatness of the rest of the cinematography. The visible TV aesthetics are further backed up by a cue driven score that provides a good amount of unintentional snickers for the casual viewer.

“Alligator” would make a really nice night cap for a Halloween film marathon. It is also safe to say that if you are one of those closeted lovers of all things The Asylum studio produces you can’t afford to miss this. Hell, even if you can’t get through 10 minutes of an Asylum film, “Alligator” is still enough fun to be worth the time.