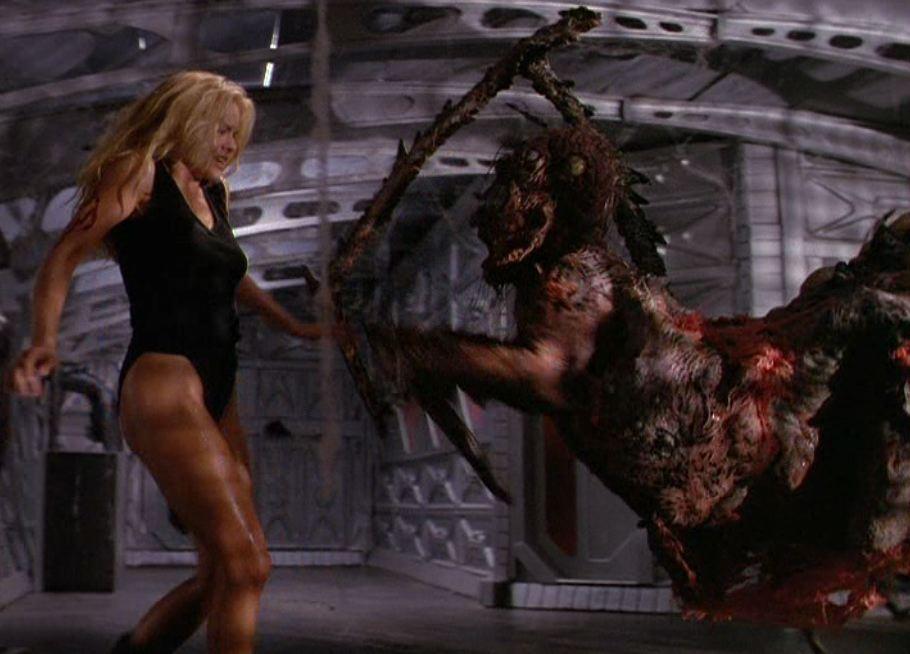 The first in the series to release straight to video, Leprechaun 4: In Space takes a brand new direction from the previous three films. In case the title doesn't completely give it away, the Leprechaun is back, however this time he's ready to take on the final frontier of space. Still present are the "classic" plot points that the leprechaun slasher is known for overall. The need to maintain his gold supply, finding a wife, and killing anyone in his way with a pun to start. The successful aspect to the space romp is that the film does not ever take itself seriously. Unlike the past three, every kill, acting performance, and digital effect set piece gives a wink to the viewer to let them know "this is supposed to be bad". Of course, the trappings of this style of film is that the jokes set the foundation for the enjoyment of the viewer. Leprechaun 4: In Space gets an A for effort, but a solid D for not delivering on the amount of work put into the picture.

In an unknown time in the future, the Leprechaun has found his new bride: a Dominian princess named Zarina. At the same time, a group of marines controlled by a half man, half cyborg scientist have infiltrated the Leprechaun's lair. They blow up the green killer and kidnap the princess to use as an experiment to bring Dr. Mittenhand back to his normal human self. Despite being blown to bits, the Leprechaun is reborn through the penis hole of a marine who took the time to urinate on the leprechaun's charred corpse. The space station eventually becomes a playground for the Leprechaun to kill every member while searching for his beloved new princess.

Speaking of penis hole, there are several scenes of death and gore that fit very well into the camp category. As described already, when the Leprechaun is reborn out the male marine's genitals it has an insanity quality that sets the stage for the rest of the movie. It's grotesque while also being goofy which is a welcome attribute. The sex crazed scientific assistant constantly reveals his obsession with women, and his death by flattened face embraces the make up effects. This moment, along with the eventual monster version of Dr. Mittenhand, reveal the attention to monster references. They feel like B movie set ups and pay offs which works very well for the fourth installment of a franchise that's never been able to find its footing in the comedy horror realm. The performances, especially Dr. Mittenhand's, are over the top and clearly indicate the director's intention to focus on gore and humor. Again, this is a welcome attempt since attempting straight up horror is ridiculous at this point in the series.

As fun as many moments are in the film, it's still not a camp classic by any means. Several of the jokes just don't land, especially in the third act, which just becomes a non-stop shooting special. However, these moments aren't as eye rolling as they could have been due to the committed performances by the actors. Thankfully the digital effects work also matches in absurdity throughout the movie. At one point the Leprechaun grows into a giant and the effects are so abysmal that he looks blurry. It's such a strange moment compared to the make up work of the Dr. Monster that it delivers a genuine chuckle.

Overall, Leprechaun 4: In Space is a reasonably good time. Kudos have to be given due to the fact that it was a straight to video release which meant a smaller budget. It seems this could have been the aspect to keep the film in the camp category instead of a failed attempt at horror.