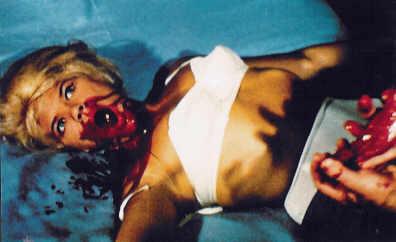 It’s a new decade, and we appear to be on the cusp of a new cycle in horror. Quentin Tarantino and Robert Rodriguez’s Grindhouse introduced the mainstream to the drive-in gore flicks of the ’60’s and ’70’s and has started a new trend at the theaters. This year has already seen "Piranha 3D" and "Machete", and with movies such as "Hobo with a Shotgun" around the corner, we appear to be at the beginning of a contemporary Grindhouse revival. And because of that, I thought it would be a good idea to do my homework and take a look at the film often credited with kicking off the original Grindhouse movement, 1963’s "Blood Feast", directed by the legendary Hershell Gordon Lewis. How does it stack up today? Well, it depends on what part of the movie you’re talking about.

"Blood Feast" is a bizarre film to watch. Outside of a handful of gore scenes here and there, there’s really nothing shocking or controversial in the whole film, at least to a modern viewer. In many ways, it feels a lot like a classic Universal Pictures horror movie from the ’30’s and ‘40s. The plot, pacing, acting and feel of the movie make it seem as if it was made two decades earlier at the height of the studio era. But on the other hand, the gore scenes are so shockingly explicit and graphic, that they made me feel repulsed 47 years later, even after having seen movies like "Cannibal Holocaust" and "Antichrist". It gives the movie this bizarre anachronistic feel where you can’t really reconcile the gore with the overall feel of the movie or the time in which it was made.

The plot is pretty straightforward and could very well have inspired drive-in classics like "The Texas Chainsaw Massacre" that followed it. The film finds Miami gripped by a serial killer who is killing women and stealing parts of their bodies. It doesn’t take long for the film to show us that the killer is a caterer named Fuad Ramses. Fuad is hoping to recreate the Egyptian “Blood Feast of Ishtar” (don’t mind the fact that Ishtar wasn’t an Egyptian God, Google didn’t exist back then) and is collecting body parts to offer the God. It’s pretty simple stuff. So simple that the film is barely over an hour long.

And despite that fact, it still drags. The two protagonists are identified as being big Egyptology buffs, so it’s difficult to watch them go from talking about the murders, to talking about an upcoming "Egyptian Feast" themed party and the creepy Egyptian caterer for 40 minutes without them putting the pieces together (on the other hand, maybe they had a hard time putting it together because Ishtar isn’t Egyptian). Outside of the gore scenes, there was nothing new or unique about this movie. It’s basically "Psycho" meets "The Mummy", with both of those films being exponentially better. Perhaps it’s not fair to judge the movie by today’s standards, but looking back at it, it’s pretty derivative and bland, especially considering the fact that "Psycho" came out three years prior.

However, no discussion of this movie can be complete without talking about the gore. Simply put, the gore scenes in this film will forever ensure that it remains a classic of the genre and solidify it’s position as an important film in the history of horror. While the plot is derivative and the film-making and acting is amateur at best, the gore scenes in this film are intense and still have punch 47 years later. More importantly, nobody was making movies with this level of gore in the early ’60’s. It’s bold. It’s different. And it’s important.

This movie opened the doors for what would become the horror genre. It was one of the first movies that went beyond all the implied gore and violence and had the balls to show it on screen. The opening scene of the film is a beautiful example. It starts with a girl getting ready for a bath. While she’s getting ready, the killer slips in the bathroom and murders her. It starts off exactly like the shower scene from Psycho. Nudity is teased, but never shown. The murder happens off camera and is shown simply by the sight of a knife moving up and down. However, where Psycho ended, this film continued. You then see the killer picking pieces of flesh off the knife. You see the naked body, stab wounds where an eye once was, the shower covered in blood. You then see the killer slowly sawing off her leg and leaving with the limb. It’s intense.

However, at the end of the day, being important doesn’t mean a movie is good or worth watching today. While an important film in the history of horror, "Blood Feast" doesn’t have much going for it other than the gore. Ultimately, if that’s enough for you to get into a film, or you’re a film buff and looking to see a movie that bridges the gap between the classic era and modern horror, you absolutely must watch this movie. However, if you’re just a fan of the genre or looking for a Grindhouse movie to watch with some buddies, you can completely skip this one. Watching "Blood Feast" these days is an academic exercise, and if that’s not what you’re looking for, look elsewhere.