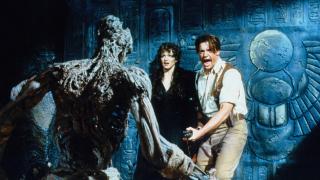 I stopped writing the news about a month ago when I read that Syfy was working on a series based on 1995's "12 Monkeys". Now I come back and what's the first thing I read? Kirk Acevedo, who has played the tough kid from the block in every movie or TV show that has had a tough kid from the block in the past 5 years, has been added to the cast. It's almost like they're daring me to stop writing again. It's almost like they know I'm just really lazy and the show had nothing to do with me not writing the news. Get out of my head Hollywood people.

I love when studios decide to drop release dates for movies even when they're a crap load of time away from now. Take Universal's "The Mummy" reboot for instance, they recently announced that it would be hitting theaters on April 22, 2016. That's over two years away. Who knows what we'll be doing in two years. Maybe movies won't even be shown on screens anymore. Maybe they'll just be beamed into our brains like the way people had sex in "Demolition Man". All I'm saying here is I don't want to sign up for seeing this movie now and then find myself being dry humped by Sylvester Stallone in my sleep.

With more and more horror related documentaries hitting the shelves it was only a matter of time before the "Hellraiser" franchise got its own. It's going to be called "Leviathan" and it'll focus on the making of the first two films in the series. No word on if it'll have anything to do with the 1989 film "Leviathan," but my guess is since that had absolutely nothing to do with "Hellraiser" it most likely won't. I'm just speculating here, though.

I know I watched the horror anthology series "Monsters" every week but to be 100% honest I could not tell you the plot of one episode. To be fair though the show was only on from 1988 to 1991 and around that time I was really starting to discover my body so my best guess is I wasn't really paying attention anyway. Well, good news for me because the show is finally getting a release on DVD this coming February 25th thanks to the folks at Entertainment One. Now with the power of play and pause I can enjoy the show and myself without missing a second. Are you throwing up yet? I hope so.

"Under the Dome", a new series coming to CBS that's based on the Stephen King novel about a town that finds itself enclosed in a transparent dome, has landed itself a bad guy in the form of Dean Norris. You might know Norris from his role on "Breaking Bad" or as 1st Scientist from the 1993 made for TV movie "Barbarians at the Gate". Probably from "Breaking Bad" though.

There's more horror shows coming to the boob tube than you could shake a stick at but one of the first to be announced is "Hannibal", a new series about a detective and the famous man-eater he enlists to help him track down a psychopath. Sounds pretty dandy and now NBC has confirmed an airing date of April 4th has been announced so it looks like we won't have to wait to long to get all fava beany. On a side note, don't ever shake a stick at your TV. You'll look like a crazy person.

I think I blocked out the fact that Universal is rebooting "The Mummy" franchise because I don't think Brendan Fraser is going to be in it and a Mummy film without Brendan Fraser is no Mummy movie I want to see. Now it looks like the big boys are sick of waiting for "Prometheus" writer Jon Spaihts to come up with a script so they hired Billy Ray to come up with one of his own at the same time. I guess the reasoning is one of them will come up with a script sometime soon so why not give it a go. I only hope they end up adding more writers to the pool and I get my chance. Keep your fingers crossed, Brendan.

I've never seen a single Michael Armstrong film but apparently he's the bees knees and people will be all excited to find out he's coming out of retirement to direct "Orphanage", a new film that isn't the remake of another film I haven't seen for completely different reasons. We really got to know each other today didn't we. I love you.