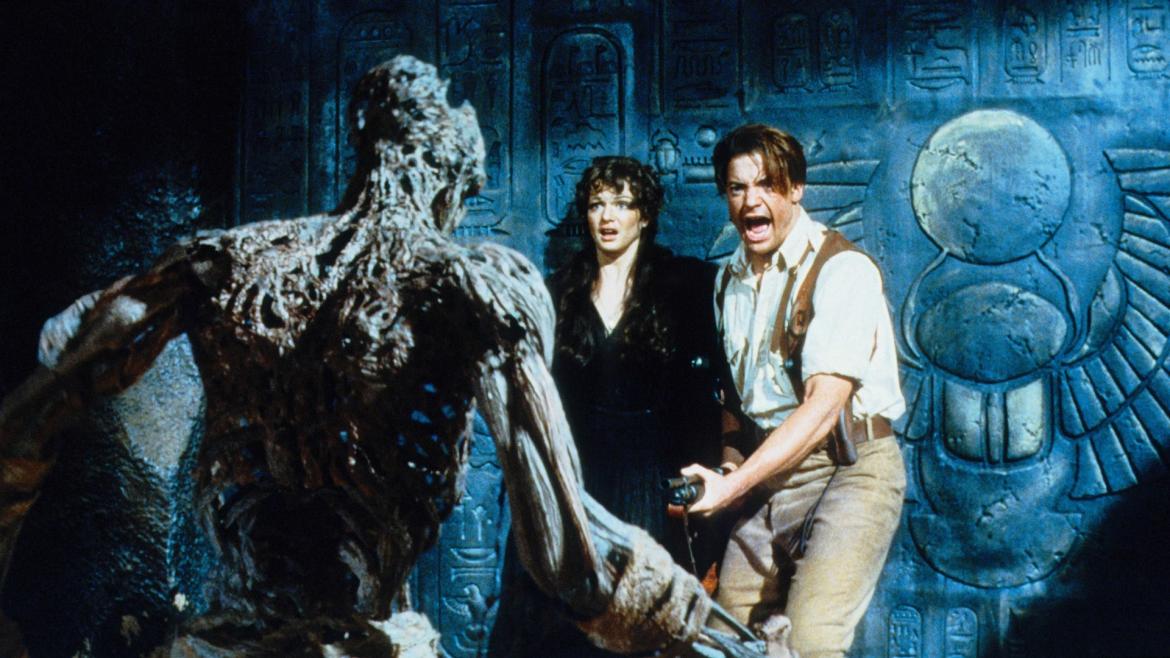 As the continued threat of a so-called "Dark Universe" is kept on life support, let us not forget the 1999 Universal hit that paved the way for the murky CGI crucible. While 2017's The Mummy leaned on Hollywood's most bankable star, the Stpehen Sommers directed The Mummy keyed into the ribald sense of humor present in a more accessible, burgeoning "star." Anyone who does not mourn the time that Brendan Fraser spent dead center in Hollywood's spotlight clearly never enjoyed the Egyptian misadventures of Rick O'Connell, AKA the poor man's Indiana Jones. Fraser's unique comedic charms and masculine demeanor paired well with the ridiculous and entertaining The Mummy.

O'Connell, is a rough around the edges gun for hire who works for starry-eyed archeologists seeking to plunder tombs of the ancient Egyptians in the early 1900's. He gets a run for his money when he meets Evelyn (Rachel Weisz). The modest but eager librarian hires O'Connell to help her and her brother Jonathan (John Hannah) find an ancient burial ground that may be hiding unknown treasures. Turns out, however, that the burial ground also holds the tomb of a priest, Emhotep (Arnold Vosloo) who suffered the most horrific death/mummification the Egyptians could bestow and, if awakened, would bring upon the apocalypse. Pretty sure you know where this is going.

There are a lot of reasons why The Mummy shouldn't work. It's dabbling in multiple genres while juggling a fluctuating tone and boasting a two-hour runtime in which the resurrected mummy doesn't start its reign of CGI shenanigans until after the first hour. Why it works is actually because of all those things mentioned. For a movie like this spending an hour with all of these characters is nearly unheard of and while the depth of character might not be extensive, we get to experience the dynamics at play and live in the adventure at hand before being thrust into something entirely different. The lighthearted tone and almost cartoonish behavior blends well with the way the film handles its heightened supernatural events.

The hour of build-up makes the initial outbreak of insanity and its surrounding waterfall of events feel much like a rollercoaster or theme park ride. It's also somewhat of a tease, because the audience is in the know that effects heavy shenanigans are awaiting, but the longer it holds off the more satisfying the release. Now, while the effects haven't entirely aged as gracefully as the film as a whole, the pyramid's tricks and traps make for a fun and unique escape that would make today's escape rooms blush a bit. The exuberant special effects carry well into the final act as the protagonists dodge the many plagues foretold by the curse they've set into motion which includes meteors crashing like rain around the city. Yet it's the more ambitious special effects where the seams show like a sore thumb, particularly the wall of sand-which coincides with Vosloo having to engage in some absolutely hilarious facial expressions and motions.

Of course, the Stephen Sommers directed adventure came right around the peak of Brendan Fraser's run as a chiseled jaw leading man and specifically highlighted the actor's likable qualities. The film also promoted a positive strong and smart female perspective yet dips a bit too heavily into the damsel in distress cliches at times in the final act. Still, the chemistry between Fraser and Weisz outshines most of the film's more problematic stretches. Additionally, the script played to many of Fraser's comedic strengths which at times made use of his masculine persona and genuine charisma. Plus, one cannot forget to mention just how effortlessly likeable Weisz was and continues to be in almost every role.

The Mummy continues to resurrect the spirit a throwback adventure with a hint of horror that delights in spite of its dated special effects. While certainly a product of its time with its cartoonish sense of humor the film remains a highlight of the late 90's and one of many reasons to root for the Fraser-aissance.