There's new Canadian trailer for "Scream 4" out on the tubes that's chock full of new clips and magic. How you can tell it's Canadian is because they dubbed in a bunch of "aboots" and instead of a knife the ghost faced guy is running around with a bottle of maple syrup. Subtle, I know.

"Atrocious" is a new Spanish found footage flick which doesn't look to far off from your "Paranormal Activity" and "Blair Witch Project". Of course it is a lot more caliente, but that goes without saying. That's the only ignorant thing I'm going to say about the new trailer though, I already filled my daily quota with the maple syrup thing.

Jennifer Love Hewitt is going to direct a new movie called "Wait Till Helen Comes" which focuses on a family that move into a house that use to be a church and discover a ghost. They then whisper creepy things to the ghost like "hey ghost, you sure are spooky, want to go into our new hot tub?". Ya know, because Hewitt has another show called "The Ghost Whisperer". Get it? Comic gold!

There's been enough one sheets for "Hobo With a Shotgun" to choke a camel but I'm a sucker for the old school grindhouse looking type posters so here's this new one. I'm not sure if the film is ever actually going to be coming out but posters are cool, so we'll just keep going with that.

Brad Anderson, of "Session 9" fame, has signed on to direct "The Living and the Dead" for Solipsist films. The story is about a "monstrous character who engages in the 19th century version of snuff theater, luring innocent poeple in a Grand Guignol of flesh and blood".

"Paranormal Activity" producers ready to sell spec for "The Jealous One".

I'm just as surprised as this guy is that Syfy has yet to make a film about the Mongolian Deathworm. Looks like we're both getting our wish?

Check out the trailer for Rob Hall's web series "Fear Clinic". Hall is fresh off his direct to video slasher "Laid To Rest". This new series will be airing exclusively on FearNET. 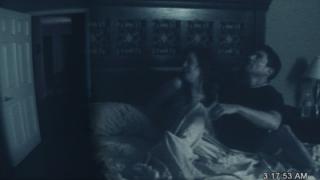