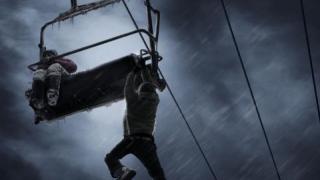 Fans of director Adam Green have reason to be extra happy this morning. Anchor Bay has announced that they will release the ski slope shocker "Frozen" on DVD and Blu-ray this September. Although the premise sounds a little goofy, the film looks absolutely fantastic. Personally, I can't wait.

IFC will unleash director Stuart Hazeldine's psychological thriller "Exam" to VOD on July 23rd. The film in question looks like a peculiar mix of "Saw" and "Cube", with a bit of David Fincher thrown in for good measure. However, depending on who you are, this might not be a recipe for delicious cinematic success.

In order to get misshapen butts into theater seats, Dimension is promoting Piranha 3D with a series of posters featuring the several scantily-clad women on a boat. Isn't this supposed to be a horror movie? I know genre fans are unnaturally obsessed with naked women, but this just sad. And people wonder why I'm not overly excited about this one.

Milla Jovovich fans, get your towels ready. The first batch of photos from "Resident Evil: Afterlife" have finally arrived! Is it sad and grossly pathetic that I own all three movies on DVD? Probably.

There's something vaguely disturbing about the new one-sheet for Tom Six's twisted human drama "The Human Centipede (First Sequence)". As soon as this thing hits DVD, I'll be the first in line to pick it up. Does this make me a sick, demented bastard? I certainly hope so.

If you're as crazy about this current wave of extreme Japanese gore flicks as I am, chances are you'll love this snazzy collection of photos from Iguchi and Nishimura’s upcoming action/gore epic "The Mutant Girls Squad". These chicks can kick my ass any day of the week.

Jason Momoa has been signed to star in Marcus Nispel's upcoming reimagining of “Conan The Barbarian”.While I am excited that a new Conan flick is on the horizon, don't you think he should look more like a Boris Vallejo painting and less like a dreadlocked hippie douchebag playing guitar while selling vegan burritos outside a Widespread Panic concert?

It looks like “Ghostbusters 3” is going to be in 3-D. Well, that's disheartening! Is sad to think that a movie of this legendary comedic pedigree, in order to sell it to idiotic audiences in this day and age, needs to resort to this irritatingly faddy 3-D upsurge. What's next? Justin Beiber as the newest recruit? A ghost who Tweets? Slimer relaxing with a Kindle??

Sam Jackson and Josh Duhamel are supposed to star in the next big angels vs. demons horror-thriller “Sympathy for the Devil”. In other news, Asylum has started rolling on the similarly-themed “(I Can't Get No) Satisfaction” starring Mario Van Peebles and Chad Lowe.

The most anticipated, and let's be honest, probably best, horror film of 2009, Halloween 2, has been rated R by the MPAA for “strong brutal bloody violence throughout, terror, disturbing graphic images, language, some crude sexual content, and nudity” . To me, that's a Tuesday. You know the funny thing about horror fans? For all their griping and bitching, you know they're gonna be there opening weekend for this. Even mice are smart enough not keep touching the feeder bar if it keeps electrocuting them. Maybe that's why I think people decrying the flick are just doing it to get attention...ERIC.

The Zombie Ants are Coming