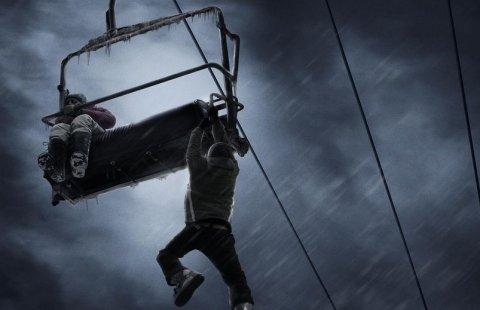 Now that October has arrived, the time has come for horror fans to start queuing up their favorite films, putting up their Halloween decorations, and bundling up for the incoming cold. It's an exciting time of the year for sure, but once Halloween is over with, there are few seasonally-appropriate modern films that capture the bleakness of the upcoming winter months in the way that "The Shining" and "The Thing" both do so well. Although it's not a perfect film, Adam Green ("Hatchet") has managed to craft a biting and terrifying feature in "Frozen," that is bound to have genre fans grabbing for the extra blankets and eschewing winter travel for a while.

The premise of "Frozen" is very simple, with little frills or twists throughout. Two best friends and experienced skiers/snowboarders Dan (Kevin Zegers, "Dawn of the Dead") and Joe (Shawn Ashmore, "The Ruins", "X-Men") embark on a ski trip together with Dan's girlfriend Parker (Emma Bell, "The Walking Dead") in tow. After a few runs of essentially dragging Parker down the bunny hill, the three friends decide to go on one last night run. When they reach the lift, the operator informs them that it's closed, but with a little coercion they are able to take the trip up one last time before the park closes for the week. Unfortunately for them, a misunderstanding among operators leads to the ski lift being shut down, stranding them high in the air, halfway up the mountain.

There are many routes that Adam Green could have gone with "Frozen," and thankfully he takes what I would consider to be the "right" approach. There is very little suspense in the first half of the film, as that time is dedicated to establishing a strong relationship between the three main characters. Although the new couple/best friend as a third wheel dynamic is by no means innovative, great care is taken to make sure that Dan, Parker, and Joe are likable enough to make the suspense parts stick. There's a marked maturation in the writing here too, as a lot of the dialog is clever and genuinely funny in a much more salient way than the humor of "Hatchet," Green's breakout film.

Once it's established that the trio are definitely stranded for the long haul, "Frozen" takes a serious, suspenseful turn. One of the film's major successes is that it manages to let the setting do a majority of the work. Beautifully expansive shots of the mountains and surrounding areas give a daunting sense of scale and emptiness, and tight shots on the lift car communicate claustrophobia effectively. The lack of CGI makes every threat feel real, from the onset of frostbite to the introduction of a particularly nasty pack of wolves that eventually surfaces from the recesses of the mountain. At nearly every turn, Green lets the viewer's potential fear of heights, enclosed spaces, natural disasters, etc. take hold as they see every possible "out" to the situation explored, to varying degrees of success.

Although "Frozen" is a gripping and extremely tense affair, it loses a bit of steam at the end. The simplicity of the film is certainly one of it's selling points, although I felt that there was something missing in the closing moments that could have brought it over the top. That's not to say there needed to be a gimmick or a twist, but there seemed to be a missed opportunity for one last major event or stark visual to bring the whole experience together. Other than that, there are no major flaws that malign the film in any notable way.

With "Frozen," Adam Green has made a huge leap toward cementing himself as a writer and director to be reckoned with. In a way, he has crafted the Anti-"Hatchet", a simple, suspenseful film that can terrify audiences without any additional context. Even though I consider the "Jaws" comparisons to be a bit overblown, it's not an exaggeration to say that anyone that has seen "Frozen" may approach ski lifts with a bit more hesitation than before. The film isn't a masterpiece, but it's well crafted and suspenseful enough to be worth multiple viewings. I'm really looking forward to see where Adam Green branches out from here.