The Spy Kid himself Mason Cook has signed on to play the role of young Eddie Munster in NBC's new series "Mockingbird Lane". For those of you not familiar with the show "Mockingbird Lane" is an updated and much darker retelling of the classic sitcom "The Munsters". One time when I was in middle school I tried to make it with a butter churn.

New Jersey's own Zoe Saldana has been added to the cast of "Machete Kills" and Danny Trejo himself has confirmed that he gets to put his mouth on her. How's that for news? I watched 3 seasons of "Glee" before I realized it was awful.

If there's one complaint I always hear about the classic film "The Exorcist" it's that the film is just too darn scary and needs to be watered down. Well good news for all those who hate awesome things the flick is being remade and for television. The show will be a ten part series and in all fairness with "Martha Marcy May Marlene" director Sean Durkin onboard I don't hate this idea as much as I thought I would. I illegally downloaded 3 Linkin Park songs that I have on my iPod when I run.

Derek Mears, who's been in every horror movie made in the last 15 years, only covered in make up... and Caroline Williams, who played Stretch in "The Texas Chainsaw Massacre 2", have been added to the cast of the much anticipated "Hatchet 3". My first time was with a girl I met on the internet and never spoke to again after that night. 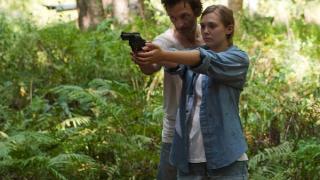 Find out if John Hawkes is more Jim Jones or Charles Manson in the 2011 indie sensation "Martha Marcy May Marlene."