"Nothing Left to Fear" is a new horror film being produced by Slash that follows a family who move into a small town and find they're living near one of the gates to hell. It's just been slapped with an October 5th limited theater run before coming to DVD and Blu-Ray on October 8th. Little known fact, Slash has a belly button ring. That top hat isn't so cool anymore is it?

Sony Pictures has picked up the rights to "Grace", a new horror flick that is shown entirely through the eyes of an 18 year old girl being terrorized by evil forces. Alexia Fast will play the lead role and Alan Dale, Lin Shaye and Joel David Moore will co-star. I'm just going to come out and say what we're all thinking. People with three names are unnatural.

A couple days ago I mentioned how it looked like "Paranormal Activity 5" was going to be pushed to a 2014 release date rather than its planned October 25th, 2013 launch. Well now it looks like the film actually won't see the light of day until October 2014 and instead we'll see the Spanish spin off film in January. Well you'll see it. I won't. I don't speak Spanish and I have no desire to see it. Unless those strippers from the Telemundo evening news are in it. Then I'm onboard.

Of course there's a "Sharknado" sequel coming. You ironic pricks on twitter made this happen. God have mercy on your soul.

So the story is floating around today that "Harper's Island" on CBS is officially canceled. Of course, since it was basically a summer filler miniseries, I'm not sure how people thought it had a chance of being "picked up" anyway. Besides, wasn't everyone dead at the end? Oooops... spoiler!

"Anchor Bay" has picked up "Grace" for a DVD release and limited theatrical run. The indie has been blazing up the festival circuit lately, and Anchor Bay seems like a logical place for it to find a home. It's an extremely limited release, only hitting a few theaters in NY and LA, but if you live in those areas you just might have the chance to see it on the big screen. The film is about "a mother who brings her dead fetus to term, and gives birth to a child with an appetite for blood".

After numerous stumbles along the way, the comic adaptation "HACK/SLASH" has a new director. Frederik Bond will be replacing Todd Lincoln as the helmer. The film will supposedly begin shooting by the year's end. "HACK/SLASH" deals with a sexy young woman who travels the country, taking on homicidal maniacs and serial killers along the way.

"Zombieland" has a poster, and it's pretty sweet.

Hi-res pic of Linnea Quigley handing out Halloween candy in the "Night of the Demons" remake. 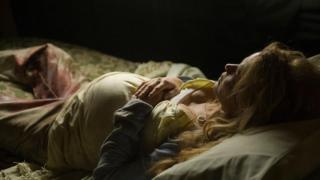