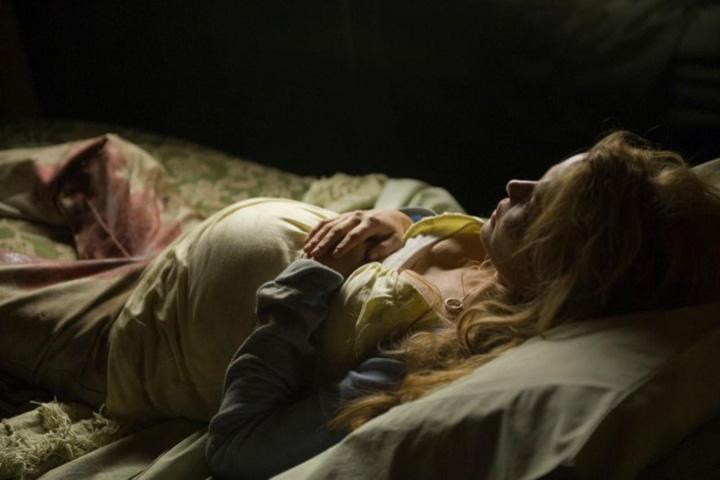 With rumors spreading of two men fainting at Sundance and women dressed as nurses walking around horror conventions cradling creepy baby dolls, "Grace", Paul Solet's first full-length feature as a writer and director, has been getting excellent word of mouth. Even Grace's rating on imdb is unusually high for an independent horror film, coming in currently at an 8.5.

I was not expecting to be disappointed by this film when I caught a screening at a film festival recently. I went in with comfortably high hopes, having heard correlations between "Grace" and "Inside", a film that was on almost every horror fan's top films of 2008 list, and one that also deals with similar subject matter, pregnancy.

The first 20 minutes of Grace are engaging. We identify with Madeline, actress Jordan Ladd, from the beginning, the first moments opening with an awkwardly demure sex scene in which Madeline serenely stares into the ceiling as her husband, whose face is hidden, slowly rocks on top of her. She immediately pulls her legs to her chest afterward, a position recognizable from "The Big Lebowski", used to promote pregnancy.

Soon, Madeline and her husband are happily pregnant having afternoon lunch with his parents, as the camera moves uncomfortably from facial closeup to facial closeup around the table. The mother-in-law Vivian questions Madeline's every thought and desire as Madeline describes that she wants to have her baby at a midwife clinic, instead of the hospital. A clear contrast is drawn between the two women. Madeline, the sweet vegetarian and Vivian, the traditional bitch-in-law.

On the way home from a visit with the midwife, Madeline and her husband get in a serious car accident. Her husband is revealed to have died and Madeline's baby also dies inside of her. Being 8-months pregnant, Madeline carries the baby to term and gives birth in one of the most jarring scenes in the entire film. The baby is born dead, but miraculously Madeline wills her baby to life. She then takes her baby, which she names 'Grace', home, but soon notices that the child has some strange cravings.

It's hard not to view Grace through a gender-biased lens, knowing that Solet, a male director, is playing around with such strong female issues as childbirth and motherhood. There are parallels here to "Rosemary's Baby" -- also written and directed by a man. In that film, the viewer is made to sympathize with Mia Farrow's character as she tries to protect her unborn baby from the bizarre circumstances that surround her pregnancy. In "Grace," the premise is similar except Madeline's motherly instincts to protect her baby are presented as monstrous. There are also no redeemable female characters to contrast Madeline and Vivian's behavior with, except for the midwife, whose role is more of an outlier that takes the focus away from Madeline's parenting struggles.

Madeline's psychological jump from sane, loving housewife to unhinged vegetarian who tries to satiate her baby's hunger while watching PETA footage or “horror movies for vegetarians,” comes off as forced. The animal slaughter footage distracts from the story in its base physicality, as do some of the other more disturbing scenes, such as one inside Vivian's dead son's bedroom. Solet's camera time would have been better spent working out some of the vague plot twists than reiterating how disturbing it is to see animals slaughtered.

Another problem with "Grace" is that the baby fails miserably at being scary. There are a few jump scares where it suddenly starts crying or projectile puking onto a nearby person, a shtick that could have come from any baby-driven comedy, but besides the baby's unexplained thirst for blood, it is fairly benign. The film would have worked better if the focus stayed on Madeline and her psychological struggle with being an only parent to a baby whose needs she has an understandably hard time meeting, but Solet chooses to look elsewhere, instead making a difficult, broad statement about women in general.

During the question and answer session after the screening, Solet described that it took him three years to write "Grace" and the film was impressively shot on a non-existent budget. When asked where he got the inspiration to make a movie like this, he replied that he supposedly had a twin that died while in the womb with him and that he had always been interested in this type of subject matter. What he intends 'this' subject matter to be is unclear, even after seeing the film, which leads one to believe that Solet doesn't know what he is trying to convey past some creepy visuals.

What is clear is that he intends for Grace to be a pro-woman film. I don't think he would dedicate it to his mother if he didn't think this were true, but in fact, the film is incredibly unflattering to new and expecting mothers, a subject that is already unglamorous without the depiction of female hysteria. He's trying to be a Cronenberg, showing us the weird complexity of human bodies, but unlike Cronenberg, he relies too heavily on archaic stereotypes to make as direct an impact on the viewer. When the screen went black, I was unsure of how I felt about the film. I have an overwhelming feeling to love almost any horror movie I attend, but as time goes on I realize more and more that something just doesn't sit right with me about "Grace".

Poltergeist II: The Other Side