I had this whole funny idea for compareing Kate Beckinsale dropping news that she probably won't do another "Underworld" movie to some of the worst disasters in history. But when I thought more about it saying this news is as devastating as well... ya know something really bad where a lot of people died is probably not so cool. I think I'm growing up.

If you've listened to a word I've said over that past few months you'd know that NBC is hard at work on their new series "Hannibal", based on the beloved man eater from "Red Dragon". If you didn't know that then I think we may need to see other people. Might I suggest Caroline Dhavernas and Aaron Abrams who have recently been added to the cast of the show as a professor and crime scene investigator. See how I made that happen? You're going to miss my musk.

Alright, I'm just going to come out and say it. For years I hated Drew Barrymore. I honestly don't even remember why at this point. But now I'm older and wiser and I don't care either way about her. Wow, it feels good to get that out there. The news here though is that Drew (I'm going to call her Drew now that we're BFF's) is in talks to direct, yes, direct, a new film titled "The End" which focuses on the more human side of the end of the world. Good for her. I couldn't be happier.

A sequel to "Prometheus" is officially in the works and planned for a 2014 or 1015 release. In related news tomorrow I'll probably get drunk.

I'm willing to give my friend Rob Zombie as many chances as his crispy disgusting hair wants to toss out. That's just the kind of guy I am. So when he takes to the twitter and says his new film "The Lords of Salem" is looking "demented, perverted satanic", I'm intrigued. For those of you not familiar with the film it's a heartwarming tale about a group of witches who come back from the great beyond to bring death and destruction on modern day Salem. Sounds like they also get some action also. Good for them.

It's about time there was a Roller Derby slasher film isn't it? That is of course if there already hasn't been one and I just haven't seen it. Let's pretend "MurderDrome" is the first of its kind though. The film is about an up and coming roller star who gets caught in a love triangle that eventually evolves into a demon filled blood bath. Demon roller people? That's got to be a new idea. Was there a demon in that Drew Barrymore flick that came out a couple years ago? I never saw it.

For those of you who haven't had a chance to get John Carpenter's "The Ward" you'll be able to get your disgusting little syrup stained hands on the DVD and Blu-Ray on August 16th. And today we've got some cover art, which is the same as the movie poster, and specs, commentary with John Carpenter and star Jared Harris. So there you have it, the same image you've seen 100 times already and some commentary with an actor who's in the movie about 15 minutes. Operators are standing by.

While it's no big surprise it's still nice to see that Bruce Campbell will in fact be in Sam Raimi's upcoming new film "Oz: The Great and Powerful" which tells the story of how everyone's favorite Wizard came to be. That is of course unless you consider those weirdos from "Lord of the Rings" to be your favorite wizards. And if that is the case I'd ask you to kindly stop reading my news. 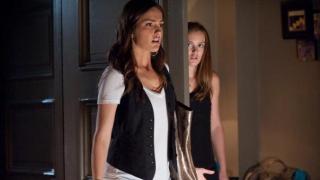