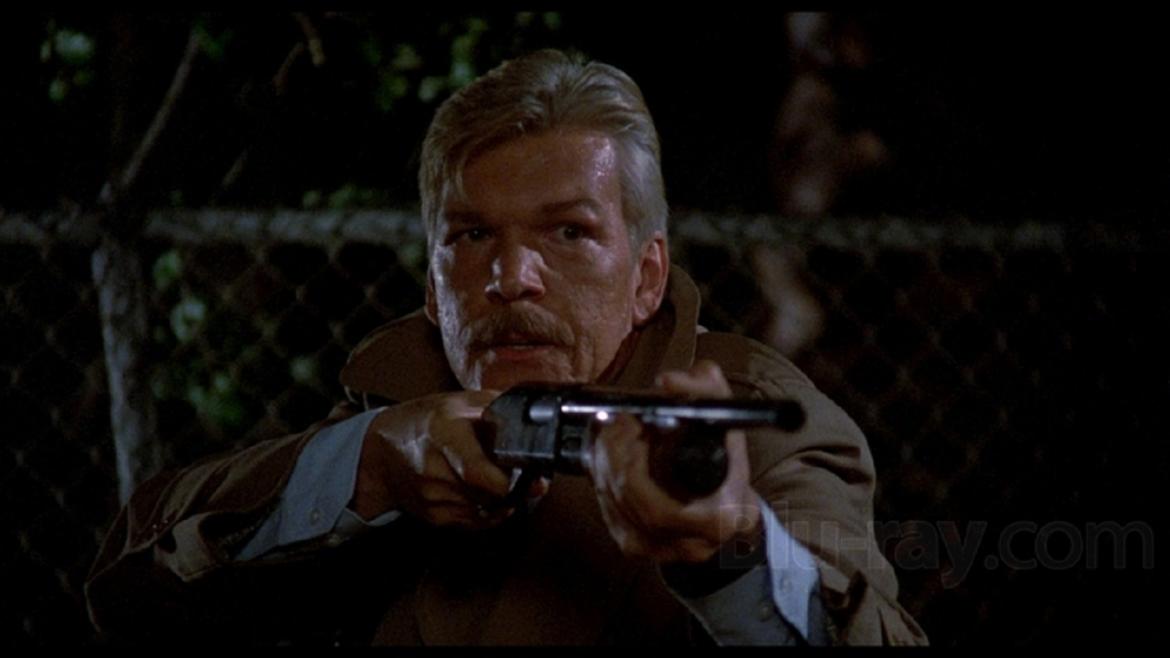 Night of the Creeps (Movie Review)

If Tom Atkins delivering lines like, “I got good news and bad news, girls. The good news is your dates are here. The bad news is they’re dead” in the most Tom Atkinsy of ways doesn’t excite you, this movie is not for you. And, you probably hate America.

Night of the Creeps begins in black and white in the 1950s, with a couple making out on Lover’s Lane when what they think is a meteor shoots overtop of their convertible Thunderbird. The two go chasing after it. The girl succumbs to one of the oldest of all urban legends, the escaped mental patient with an axe, while her date follows the now crashed outer space object into the woods. Said object contains a black, slug-like parasite which shoots into the college boy’s mouth. We then switch to color and fast forward to 1986. Two nerdy guys, Chris and J.C. are attempting to pledge a fraternity so that Chris can get closer to his dream sorority girl, Cynthia. The frat dares the two boys to go into a laboratory which just happens to have the cryogenically frozen body of the parasite-infected 1950s guy. He’s unfrozen, escapes the lab, and spreads more slugs around the town, wreaking havoc. Chris and J.C. enlist the help of badass cop, Ray Cameron (Atkins), who was the former boyfriend of the young lady murdered by the mental patient, to rid the community of these denizens from beyond.

In all honesty, the movie starts out pretty rough. The college kids‘ acting ability varies from mediocre to awful, and the setup of establishing the friendship between Chris and J.C. and Chris‘ attempts to woo Cynthia goes on a little too long. But once Atkins shows up, things get good, as one would expect. Creeps is another in a long line of great roles for the actor including Creepshow, The Fog, and Halloween III: Season of the Witch. He never disappoints. Each time Atkins enters a crime scene with a new corpse, he exclaims, “Thrill me!” as only Tom Atkins could. And Atkins, Chris, and Cynthia killing reanimated dead people with shotguns and flamethrowers is nothing but fun. The final act of the film features a heavy dose of good old ‘80s gore, girls with big hair, ‘80s douchebag frat boys, and even more fun one-liners from Mr. Atkins.

Night of the Creeps was written and directed by Fred Dekker of House and The Monster Squad fame, and the three movies form a nice loose trilogy of weird but fun horror of the era. Dekker’s last directing entry was RoboCop3 in 1993, but he’s listed as the writer of the screenplay for the upcoming The Predator sequel/remake with Shane Black directing and Arnold returning, which is great, as Dekker is someone who should get more quality work.

This is the quintessential mid-‘80s creature feature with nice practical effects, teen angst, and a little T&A. Throw in Tom Atkins chewing up scenery and blowing away bad guys, and this one is a must-see.