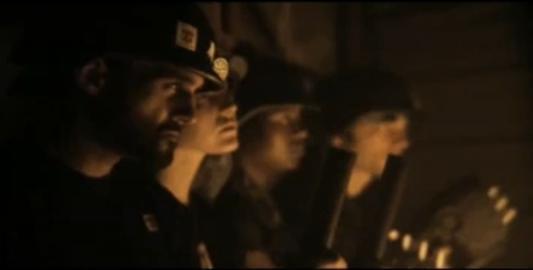 A common tool for science fiction thrillers is the idea of total isolation. Force your protagonists into a situation where no one can possibly come to help them or hear them scream. A common setup for this is to use a desolate planet in the far flung reaches of space, a destination so far out that their nearest neighbor is light years away. Mix this with some dangerous character types such as violent prisoners who are so bad that they can't be trusted around any other life forms, and you have yourself the trappings of a nice little space scare. Such is the setting for "Alien Uprising".

A crew of space marines are sent to a prison planet to investigate. Months earlier, or years as they clumsily try and calculate, the prison went silent. When the marines arrive, they find that it is filled with with a handful of armed prisoners, no guards, and a rather slimy guest that is laying waste to any one who's not paying attention. With some extra corporate intrigue added to spice things up, "Alien Uprising" sounds like a good old fashioned sci-fi horror hybrid. Which it should; we've seen the same setup several times before.

There are a host of issues here, but there are still a few things to admire. The film smacks of first time filmmakers working on no budget whatsoever. For this type of film, they do a good job of putting together a full story and some decent home made effects. There are no major plot holes to speak of, just a rehashed plot. The problem is that when those circumstances are matched up with a green cast that tries very hard, sometimes too hard, it quickly devolves into a chore.

Pacing rears its ugly head here as well. As the film opens, you get the impression that the crew had a distinct vision of what they wanted to convey. Sadly, it comes across stilted and fails to move. Much like an old car on a cold winter morning, the engine keeps turning but never catches.

Eventually they do manage to get their feet under them and the movie starts to roll along, finding itself and begins to tell a story. Things manage to carry on in ok fashion until the ending of the film. We run into a case of a story that doesn't quite know when to end. There are several misfires that you assume will be the end finale only to have the film fade out and surprise you with a whole new scene. Any of those stopping points would have been fine on their own. After sitting through a rehashed film that would have been okay if not stale, this only serves to be annoying and frustrating.

There is another glaring issue I have with "Alien Uprising"; the monster. There is a whole school of theory that you should never show your monster, or only glimpses, to setup fear, tension and mystery. However, there are times when it is perfectly acceptable to show your monster, especially when so much time is spent on how the creature came to be as a major plot point. Here, we get a brief glimpse of the beast, and never see him full on again. Instead we get pre-recorded screams and growls that the actors react to. In the middle of such a "been there, done that" type of story, such a creature needs to be featured full on to keep the movie from falling into boredom.

"Alien Uprising" has a tried and true formula but falls short due to budget and directorial choices. The acting is hammy and forced at times, but that is to be expected in these types of low budget features. Too many of the scares happen off screen, leaving too much of the film to our imagination, which keeps this from being truly scary. With some ramped up gore and more monster carnage, it could have been a decent film compared against others in the low budget sub-genre.