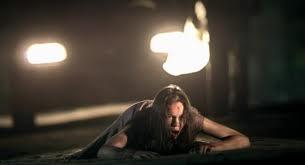 The worst thing about 2011’s “The Road,” a Filipino horror film now available in the United States, is the title. Sharing the same name as the Pulitzer Prize-winning novel by Cormac McCarthy (and the film that followed), this “The Road” could get lost in the shuffle. And that would be a real shame, because it is a surprisingly strong film that gives you scares without falling into a ton of typical jump scares and cliché plotlines.

“The Road” is a collection of three inter-connected stories, which probably already puts a bad taste in your mouth (“Ugh, another anthology film?”). But director Yam Laranas does a great job connecting the stories together and keeping the viewer engaged and engrossed. The first story (admittedly the weakest of the three) is about three teenagers (two girls and a guy who I thought looked more than a little like McLovin from “SuperBad”) taking a wrong turn down a dirt road and getting involved with a number of spectral visions. This story is about ten minutes too long and nothing we haven’t seen before, but even this weak story has some incredible imagery. Laranas relies on some interesting camera angles to create his scares, and the effect works. There are scenes where ghostly images are standing at the far angle of the screen, just enough to make you ask, “wait, what did I just see?”

The second story backs the clock up ten years and we get some background on the images seen in the first story. In this one, two teenage sisters are lured into a backwoods home by a deranged teenage boy and tortured and beaten. This story is darker and more violent, reminiscent of films like “Martyrs” (although not nearly so graphic). There are more ghostly images in this story as well, similar to the first, and again it is just enough to keep viewers on edge.

And then we get to the third story, which backs the clock up yet another ten years, and we see what caused this teenage boy to become to disturbed. This is the strongest of the three stories, and we see this boy’s truly off-the-wall parents.

In between each of these stories Laranas weaves a related story as a detective tries to solve the mystery of the three teenagers as well as the two sisters who had disappeared ten years earlier.

“The Road” gets a little predictable as we get closer to its “shocker” ending, but it’s a great ride getting there. As I said, Laranas uses weird camera angles and colors to create horror without too many gimmicks. “The Road” is beautiful to look at, much like a Dario Argento film. And the acting! I can’t remember the last time I saw a direct-to-video horror movie with acting performances that I can actually call decent. I don’t know if the actors in this film are stars in the Phillipines or if this is their first film, but they all gave great performances. Even the young deranged teen in the third story doesn’t fall into whininess like so many other kid actors.

Is “The Road” a classic? Time will tell. But compared to much of the other films to come out recently, this one really stands out. I really recommend this one. Is it too late to revise my “best of” list?

The Seduction of Dr. Fugazzi