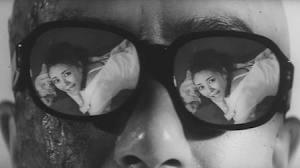 A group of pirates hijack a boat to steal it’s cargo and in the process maliciously gun down everyone on board. Months later the ship continues to reappear off the coast and a young girl named Yoriko feels strangely drawn to this ghost ship. She makes her way on board to find out her twin sister was among those who had been murdered, and soon afterwards the gunmen begin to die one at a time.

One of the reasons I think I enjoy classic Japanese movies so much is that despite the fact that they are older movies, they are usually so foreign, and oftentimes so bizarre, that they really don’t seem dated at all. In fact many of the older Japanese horror movies tend to be about the samurai era which makes them seem even more exotic to me. However, in the case of “The Living Skeleton,” it is set in modern times and is surprisingly Western. The opening minutes of the film struck me as a bizarre, and completely unexpected, time-capsule of post-war Japan, and highlighted the American influence on Japanese culture with images of go-go dancers, speedboats, and even Catholicism. Also the element of the “ghost ship” seems overtly Western, as the design of the ship is something you might expect to see in an American film of the time.

The movie starts out a bit slow and I thought I’d made a mistake in watching this, but it really kicks into high gear as soon as Yoriko and her boyfriend discover some skeletons that are tangled in sea weeds while they are playing on their speed boat. These skeletons appear two or three times in the movie and are so absolutely ridiculous looking that they seem more like something that belongs in an old Disney cartoon and not in a horror movie at all. However these instances of special effects that are a little bit “off” are a large part of what ultimately makes “The Living Skeleton” such an incredibly fun movie. There are tons of silly looking plastic bats attached to strings, several miniatures that don’t quite look right, bodies “dissolve” using stop motion photography which are eaten away by “acid that is made with human blood,” and dummies that are supposed to be people which are thrown down buildings and off boats to comical effect.

Every now and then, when I watch a movie that Criterion has released I have a hard time understanding what they saw in the film, however with “The Living Skeleton” there isn't any mystery whatsoever. This movie is a real gem that is absolutely bursting with charm. In fact the only movie I can really compare it to is the original “The Evil Dead,” which is also much more charming than it is “good” in the traditional sense, except for in the case of “The Living Skeleton” there is no twinkle of goofiness from the actors like you get from Bruce Campbell in “The Evil Dead.” Every performer is giving this movie their all, as if they were making the most serious and important movie ever made, which contrasted with how silly the special effects and plot are, only serve to make it even more enjoyable.

If you were to buy this movie, it comes in a four-pack with “Goke: Body Snatcher from Hell,” “Genocide,” and “The X from Outer Space,” all of which are fun movies, however in my opinion “The Living Skeleton” stands head and shoulders above those other films because of how incredibly fun and charming it is. I was a little skeptical of this movie at first, but after finishing it, this is a film that I am really excited about and look forward to revisiting in the near future. If you have any interest in classic Japanese horror films, or think you might enjoy a foreign counterpart to a movie like “The Evil Dead,” than I really couldn't recommend this movie any more highly.