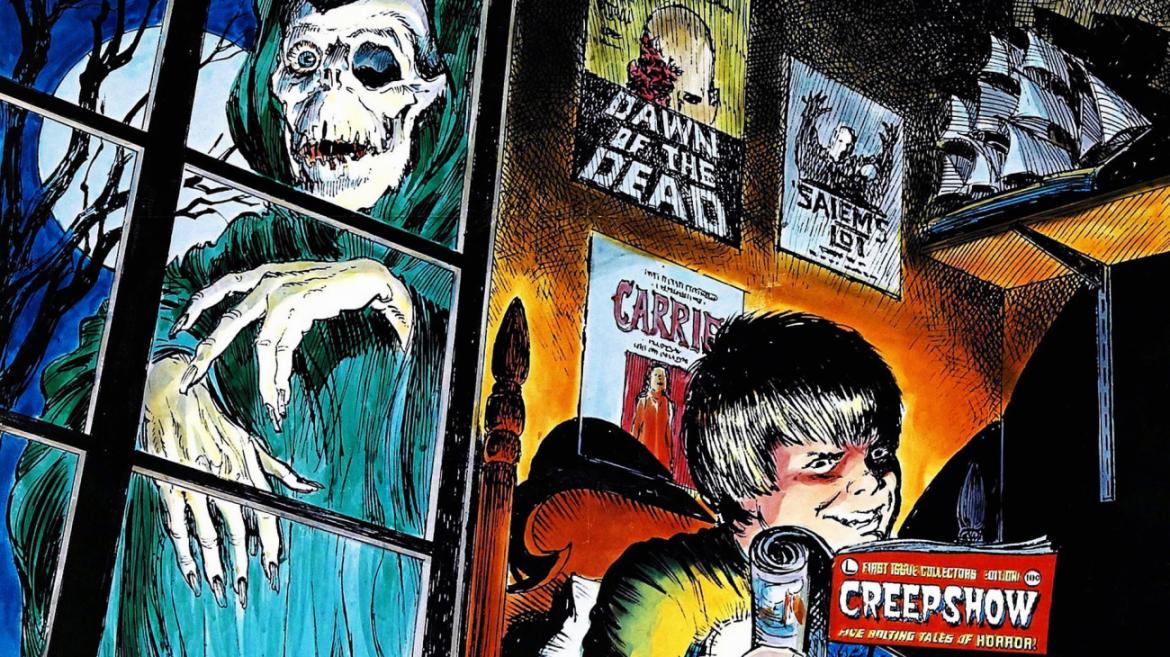 In many ways Creepshow is an oddity. It’s the rare collaboration between giants in the genre that works in an uncomplicated and seamless fashion. It’s an anthology with no low point. It is a 2 hour film that moves effortlessly to a satisfying conclusion. It even has a chilling and meaningful wrap around story that hammers in the theme without ever feeling forced. It’s an homage film; a film made in 1982 to E.C. comics and it does so without an ounce of awkwardness. Even today, while watching it, it’s impossible to ignore its magnificence.

Creepshow is broken up into 5 stories, “Father’s Day”, “The Lonesome Death of Jody Verill”, “Something to Tide you Over”, “The Crate” and finally “They’re Creeping up on You.”. Each of these segments are different. They represent different ideas and tone, they represent a variety of characters and deal with an array of settings but they all remain grounded by two things. One is the visual representation of the format, it fully and unabashedly embraces its comic book roots and is evident in every single frame of the story, in most films this would seem cheesy, and in a way it is. The tone throughout feels tongue in cheek and yet in Creepshow, this increases the films greatness instead of detracts. All of it feels charming and unique because all the other elements of the film works to perfection.

Secondly, and equally important, there is a unifying theme. The horror is turned on us because of our own flaws. Starting with the wrap around and signaled in every story, Creepshow is about how our greed, pride, and inhumanity is our own undoing. The greedy businessman gets his comeuppance as does the idiotic and opportunistic hayseed. The dead comes back to punish the actions of the psychopathic and egomaniacal husband. The overbearing father is dealt with in short order, as is the overbearing and alcoholic wife. There is a perfectly golden karmic balance to the events in this world.

Those two things make this is a complete and unified anthology beyond any other. However, there is another element that sets it apart. The acting. In most anthologies, it gives the producer the excuse to treat each segment as a short film and therefore you can get second rate actors as no one actor can possibly ruin the film. There is no such thought in Creepshow. In the first segement “Father’s Day” there is a scene where the late Viveca Lindfors monologues for nearly two minutes about her late father’s abuse. This is a scene where a lesser actor goes way over the top, instead, because she gives a strong performance in her three minutes of screen time we are grounded in the moment, we understand the emotional weight of the situation and everything else comes from that. In Creepshow, it’s always about the people.

If you haven’t seen the original Creepshow. What are you doing? Go watch it.